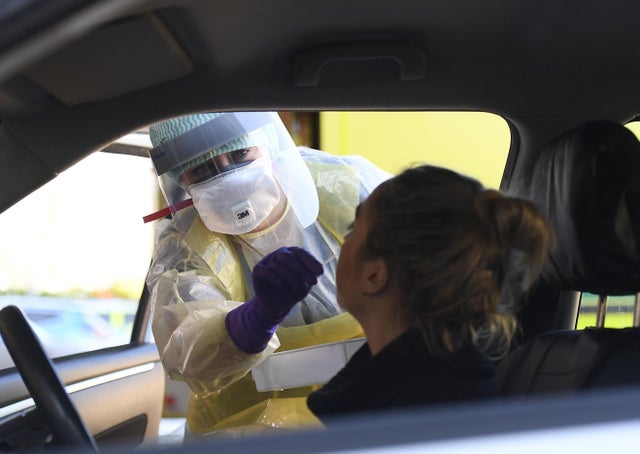 On April 2nd, State Representative Randy Fine (Palm Bay-R) did a Facebook live video with Dr. Deligdish, President of OMNI Healthcare to promote the opening of his drive-thru Covid-19 testing locations. The 30 minute video begins with Dr. Deligdish, who Fine describes as his friend, promoting Fine’s current re-election campaign. (Campaign finance reports show that Deligdish was a major contributor to Fine’s last campaign) Patients also reported that the only paperwork they received after getting tested at OMNI was a letter from Representative Fine.

The first location opened on April 7th. OMNI claims to have the capacity to collect up to 500 tests per day, running at 10 hours per day, 7 days a week. Fine asked Deligdish if they would be sending the tests out to be run at other labs. He said they had 2 national labs they were sending the specimens to that were currently doing thousands of tests per day, and have been doing so for several weeks. He went on to say that one of the labs was the 3rd largest in the nation. He claimed to have a relationship with both labs and that they would be getting results back either the same day, or within 24 hours.

Except that is not what happened. Hundreds of residents lined up to take advantage of these testing facilities. Patients received text messages from Omni, promising them results within 36 hours. According to dozens who received the test on April 7th, they have yet (8 days later) to receive their results. Some say they have called and were told to leave a message to get a call back. Most say they have not been called back, and those that have were told that their results were “inconclusive.” Individuals without insurance had to pay $127 for testing.

Every day, the Florida Department of Health publishes a Covid-19 Daily Report which shows current testing data to include positive, negative, inconclusive, and the total number of tests by County. On April 13th, the number of inconclusive tests went from 12 to 204. At that time, Brevard had conducted 3,111 tests total. An email was sent to the County Commission pointing out the tremendous increase.

According to an email from Maria Stahl, Brevard’s Administrator for Florida Department of Health, that number jumped because it was the first time OMNI started reporting.

Residents took to Facebook demanding answers. When Representative Fine was pressed for an answer he stated he thought it was reasonable and they were just “working out the kinks” and wouldn’t be ongoing.

However, it was ongoing. The very next day, the number of inconclusive tests almost doubled to 391. The combined total of “inconclusive” tests from every single county in Florida except for Dade is just over 330. Most have none. Dade County has conducted nearly 46k tests, and only 1% of them are inconclusive. In comparison, Brevard was reporting 11% of their tests as inconclusive.

This prompted further discussion between the FDOH and Omni. Emails from Dr. Delgisdesh show that he blames the number on a coding error and that the matter had been corrected. Dr. Stahl then clarified that results from Omni that were being reported as “inconclusive” were actually “invalid.”

There are 2 issues with this conclusion. The first is that according to patients that were tested by OMNI, they were called to have their results reported to them, and they were reported from OMNI as inconclusive, not invalid. They were also told the needed to come back in for retesting free of charge.

The second issue with this conclusion is it is not clear the difference between “inconclusive” and “invalid.” But to the patients it doesn’t matter, because to them and to the public it means they do not know whether they are negative or positive a week after being tested. It also means that literally hundreds of testing kits, which are very limited right now, were essentially wasted.

The bigger question is why? Why are there so many inconclusive or invalid tests coming from one facility. That is a question no one wants to answer. In another email, Dr. Deligdish stated he would not be answering any further questions on the matter.

There are various factors that could be contributors to such results, from improper collection practices to failing testing controls. Without further information, we cannot possibly determine what the cause is here. However, by Omni’s own words, the 2 testing facilities he contracted out to had been already conducting thousands of Covid-19 tests per day for weeks. Also, no other county of facility in the entire state of Florida had these kinds of numbers or coding issues except for Dr. Deligdish’s Omni Healthcare.

Of further concern was this evening’s FDOH Daily Report. The total number of reported inconclusive tests went from 391 to only 3. Inexplicably the total number tested dropped from 3,581 to 3,374. It appears that the FDOH did what they said they would do and not report invalid tests and inconclusive, but it also appears that they decided to not count them as a test at all.

To date, OMNI claims to have tested over 3,000 patients since April 7th. The validity of those tests are “inconclusive” at best. Representative Fine, tonight says he considers the issue resolved.