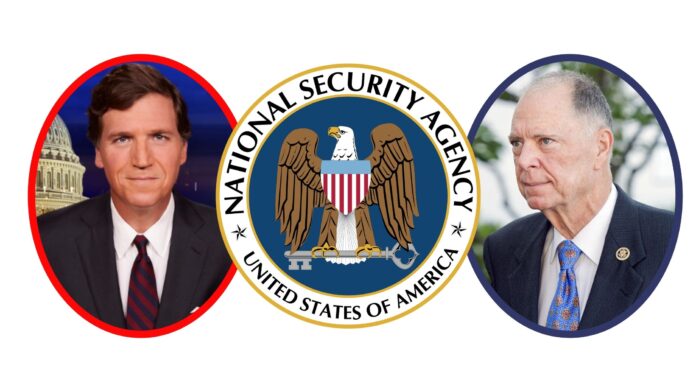 The letter calls on the NSA to provide them with information about allegations that the agency was spying on Carlson in regards to communication with U.S.-based Kremlin intermediaries pertaining to a potential interview with Russian President Vladimir Putin, Axios reported. The Axios report referenced two sources “familiar with Carlson’s communications.”

The letter called for the following information:

“Spying, unmasking, and leaking the private communications of American citizens weaponizes our intelligence agencies, and this abuse of power must stop. Protecting national security is not only about deterring enemy threats, but it also involves safeguarding our liberties,” Posey said.

For the better part of two weeks, Carlson — the highest-rated host on Fox — has repeatedly claimed that the Biden administration was spying on him.

Fox pointedly has not covered his claims on its newscasts, even though such an intrusion would normally be a significant news story. Fox has not shown any outward signs of investigating Carlson’s claims.

Carlson originally attributed his information to a “whistleblower within the U.S. government who reached out to warn us.” He said, “the NSA, the National Security Agency, is monitoring our electronic communications and is planning to leak them to take this show off the air.” However, Carlson, has offered no proof of his allegations.

The NSA issued a statement saying Carlson is not the target of any investigation and that the agency had no intention of forcing him off the air. One week later, Carlson claimed that Biden’s NSA has leaked the contents of his emails to other members of the media.

Suzanne Scott, the network’s chief executive, and Jay Wallace, the network’s president, have not issued any statements of public support for Carlson, nor have they condemned the NSA for the massive abuse of power Carlson alleges. Lachlan and Rupert Murdoch, who control Fox Corporation, have also been silent on the matter.