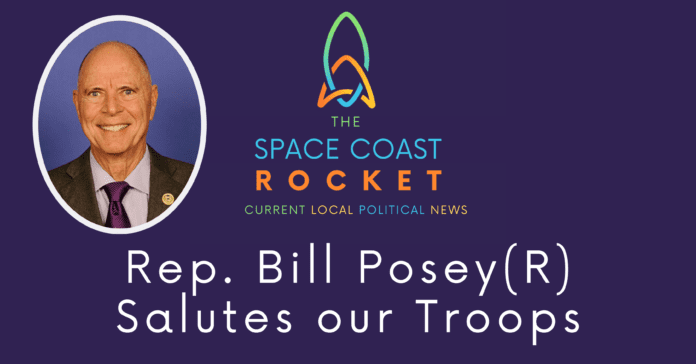 “No words can express our nation’s sincere gratitude to our military service members, and their families, who have answered the call to serve our country. Since the Revolutionary War, which secured the independence of our great nation, over 1.3 million brave Americans have made the ultimate sacrifice to protect our freedom, and ensure the survival of our nation.

“On Veterans Day we recognize the struggle for peace and freedom brought to our lands due to the courage and sacrifices of our military veterans and their families. There are those who fight because they can’t live in peace, but we salute our brave men and women of our armed forces because they want to see peace in our time.”

Posey was slated to be the Grand Marshall in today’s Palm Bay Inaugural Veteran’s Day Parade which was cancelled due to inclement weather.

Palm Bay Park’s and Recreation released a statement saying the parade will not be rescheduled. However, the Holiday Parade will be on December 7 with the theme “Stars & Stripes in Lights.

The City of Palm Bay partnered with American Legion Post #117 in bringing the parade to life.

“As I meet with different members of the city of Palm Bay, I always said I wanted a parade in our city, the most Veteran Friendly City in Florida, by my opinion,” said Bruce Thurber, Commander at American Legion Department of Florida 12th District.

“After years of talking about it, we received a call from Kenny Johnson who asked us to meet with him at City Hall as he wanted to make it happen,” Mr. Thurber continued. “We laid out our idea to him and next thing you know, we have the Palm Bay Veterans Parade first planning meeting.”