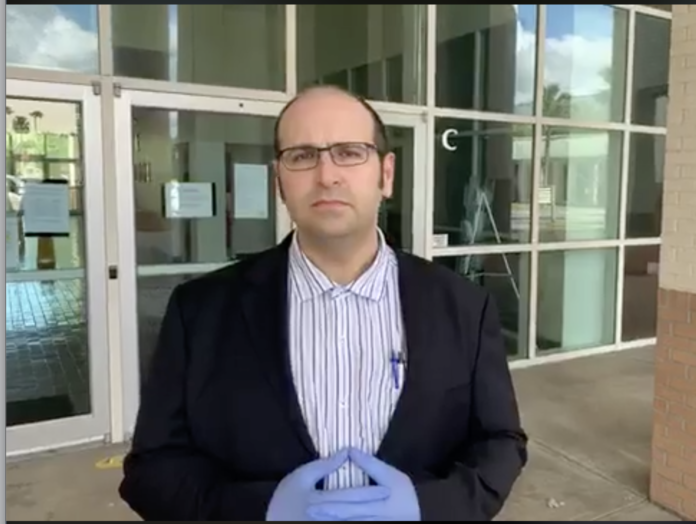 During the last meeting, Commissioner Tobia introduced a proposal geared toward making it easier for victims of domestic violence to check into hotels to escape a dangerous situation. Commissioner Lober argued against Tobia’s motion and wanted the commission to wait on his own proposal in the coming days. During the debate, Commissioner Lober made several jokes which were not received well. Tobia stated he did not think there was anything funny about domestic violence.

Commissioner’s Smith and Pritchett also weighed in on the measure and agreed with Tobia’s approach. Lober who was hesitant to call the question, did so and the motion was approved 4-1. Lober stated that regardless of the vote, he would advocate his wishes to the Policy Group which he is also the chair of anyway.

Following that vote, Lober passed the duties of the chair to Vice Chair Pritchett so that he could make his own motion to make it illegal for stores to allow patrons to be within 6 feet of each other inside their facilities. If passed, it would have made store workers susceptible to being jailed and fined for failing to enforce the guidelines.

Several arguments were made against this proposal including how it could be enforced. Most stores have been found also to be enforcing this as much as the can already. Commissioners didn’t feel it was necessary and also stated that these stores are already under tremendous amounts of added stress and responsibility trying to accommodate patrons during the pandemic as it is. Adding the threat of jail was not well received.

The motion failed for lack of being seconded. After that, Lober abruptly adjourned the meeting.

After the meeting, Lober took to Facebook and made a series of public posts. One of them containing a very serious allegation of someone breaking Sunshine Laws. Lober did not clarify his statement or give any further details when pressed by followers and left it to them to speculate. The only board the Lober chairs that is subject to Sunshine Laws, is the County Commission. The Policy Group which he also chairs does not fall under those laws.

Lober scheduled meetings for the Commission every day in case something needed to be discussed or voted on, and for the Commission to meet, it requires a 24 hour notice to the public. Lober argued that because of Sunshine laws, he could not know if other Commissioners had things to discuss until the meeting in order to rationalize continuing to scheduled them.

On this pasts Monday’s meeting, Lober was questioned by Tobia for the purpose of that meeting as nothing discussed seemed to be of importance that required the Commissions attention or actions. Lober used that meeting to start off with a 10 minute rebuke of an email from the staff of Commissioner Smith’s office to a constituent that Lober did not agree with. He then spoke about a letter he received from Hooters.

Lober agreed that if there was nothing important to speak about in the future he would cancel the next scheduled meeting to not waste resources. However, the action Lober took earlier today to cancel the meeting for tomorrow appears to be premature. Since there was a scheduled Policy Group meeting to take place later today, it is unknown what would be discussed or voted on as a result of that meeting. Lober has effectively completely taken the Commission out of the picture in what appears to be retaliation.