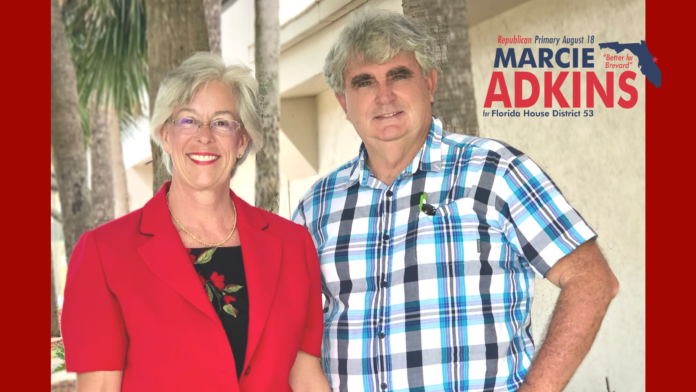 In a press release today, the Adkins campaign released the official endorsement of Brevard County Clerk of Courts Republican Scott Ellis to her candidacy.

This announcement comes on the heals of a series of bizarre attacks from Randy Fine on other elected Veteran Republicans in the district, to include retired Lieutenant Colonel and Melbourne City Councilman Tim Thomas, and both the Mayor, Kathy Meehan, and Vice Mayor Alfrey of Melbourne for not agreeing to have his campaign fireworks event.

Over the last week, Fine has gone on a tirade of personal attacks against Dr. Adkins’ political consultant Robert Burns. He held a press conference for one of the attacks calling Burns a 6-state felon but offering no evidence to support his claims. After witnessing the event, none of the news stations that showed up chose to air the coverage. Several chose not to attend the event given the content of Fine’s past conferences.

The attacks came on the heels of Fine losing by nearly 30 points in the official Republican Straw poll on July 3rd.

Several elected officials labeled his behavior as embarrassing and desperate.

Fine has reportedly solicited several endorsements from local elected officials but was turned away. However, prior to being challenged by Adkins, he did receive the endorsement of Brevard County Sheriff Wayne Ivey as the only republican candidate at the time.

Scott Ellis is well known and respected as a Republican leader throughout Brevard and been labeled as Mr. Integrity after turning down and reporting an attempted bribe from a debt collection agency bidding for a contract. He is also known for his fiscal conservative approach to governing with one of the most efficient budgets in the County.

Adkins response to the endorsement:

Since the straw poll, Adkins has been gaining tremendous support and momentum in spite of the constant attacks from Representative Fine. She has agreed to every forum and debate offered while Fine has stated he will attend none. Even backing out of the only one he did agree to with Palm Bay Live just hours before it’s scheduled time.