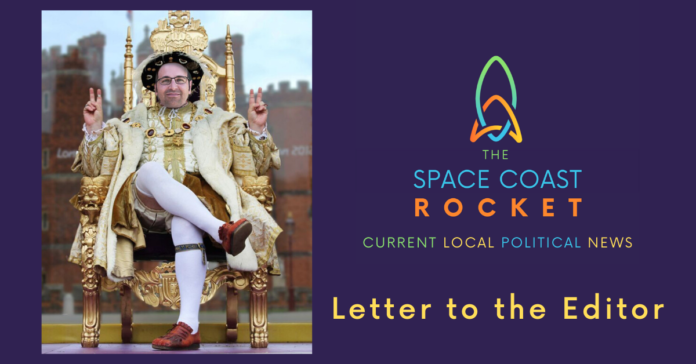 UNMASKING A TYRANT … EXPOSING THE HYPOCRISY OF KING LOBER!

This story is about what happened at a social gathering that took place on July 4th of this year. Other than Bryan Lober and Myself, the names of everyone else involved in this story will be kept confidential out of respect for their privacy. I was not planning on telling this story until it became apparent within the last 48 hours that Commissioner Lober was planning another attempt at a county wide mandatory mask ordinance.

You may recall that on June 30 the Brevard County Commission met to consider Commissioner Lober’s proposed mandatory mask ordinance. County residents spoke out better than 2 to 1 against it and it quickly became clear that the other 4 Commissioner’s were opposed to it as well. Lober then scrapped the ordinance for a strongly worded recommendation that people should wear masks when in crowds or when patronizing essential businesses.

Four days later my wife and I attended a July 4th celebratory cookout and fireworks display that was also attended by Bryan Lober and his wife. It was a nice evening of casual conversation, food and fireworks. The weather was bad that day so most of the evening was spent inside. It did clear enough to enjoy the fireworks later in the evening.

On June 30th Bryan Lober opened the county commission meeting with a condescending lecture about how critical it was that everyone wear a mask and practice social distancing so as not to spread Covid-19 which would put everyone in the county in danger of critical illness and even death. The danger from the virus was so great that the County Commission should make wearing a mask in public mandatory under many circumstances.

Four days later, on July 4th, Bryan Lober spent the entire evening mask free, standing, sitting, eating and drinking, within one or two feet of 10 other people. Mask free for several hours until the end of the evening when the hostess wanted to record a video to share with another friend that wasn’t able to attend for medical reasons. At that point Bryan dug into his pocket and whipped out his mask. I can only assume he didn’t want to be caught on video not wearing a mask. Of course he took it off again as soon as the filming was over.

I’m left with one of two conclusions. Either Bryan Lober does not believe that masks are really all that important in stopping the spread of Covid-19, which would mean that he lied for political purposes during the county commission meeting on June 30th. Or, he does believe it which would mean that on July 4th he cavalierly put the rest of us at risk of serious illness or even death in the event he had been an asymptomatic carrier of the virus. How could it be anything but one or the other of these two possibilities? You can draw your own conclusions.

As I said earlier I would never have brought this up but for his renewed effort at a mandatory mask ordinance. Enough with the petty tyranny and hypocrisy of these tin pot politicians.

Bob White was also a candidate in the 2018 Florida Governor’s race placing 3rd in a field of 8.

Letters to the Editor