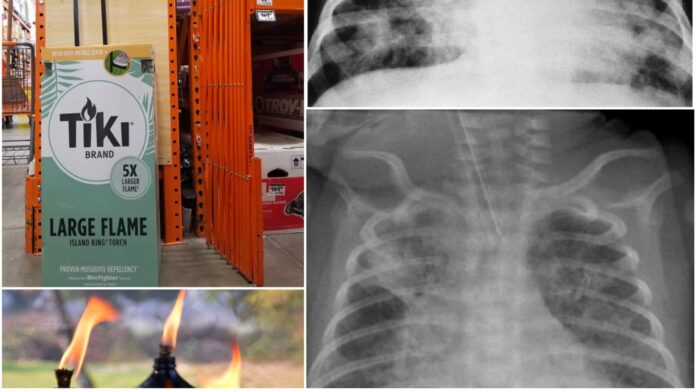 Be careful this summer in your backyards!!Issa fabulous mid-summer party in a beautiful, newly landscaped backyard. Family and friends of all ages gathered in fellowship with BBQ, a pool, and abundant laughter and the sharing of nostalgic memories.

Illuminating the periphery of the yard are tall Tiki lamps, some with citronella to ward off mosquitoes. All is well until a 5 year old child is found on the ground near a Tiki lamp coughing….This patient is a previously healthy 5 year old little girl with no significant past medical history brought in by paramedics in respiratory distress after being found on the ground near a Tiki lamp that had been “blown out.” Older children at the party said the patient was trying to “blow out the candle” to “make a wish” when the fuel in the tiki lamp spilled onto her clothing.

Upon arrival to the emergency department, the child was alert and oriented, agitated, afraid, with labored breathing and an oxygen saturation of 92%. On exam, coarse breath sounds are noticed in all fields. Respiratory rate was noted to be 30. Stat portable CXR revealed bilateral infiltrates.

Despite ED treatment which included nebulizers, steroids, and even the institution of IV antibiotics, the child continued to deteriorate and was intubated and admitted to the pediatric ICU. Her ICU course was complicated by a nosocomial pneumonia (lung infection from being intubated in the hospital) and it was noted on ECHO that her cardiac contractility was diminished (she was having some problems with her heart) that was attributed to cardiotoxicity to the hydrocarbon.

Despite aggressive ICU care, eventually even including ECMO, the child died on hospital day number 21. Tiki lamps have a very volatile, flammable, hydrocarbon fuel that when swallowed tends to also be inhaled. This causes severe lung injury, shortness of breath, coughing, and in a child can easily lead to respiratory arrest. The heart and lung damage can be irreversible, and in my opinion, is a very often overlooked danger – particularly in children.