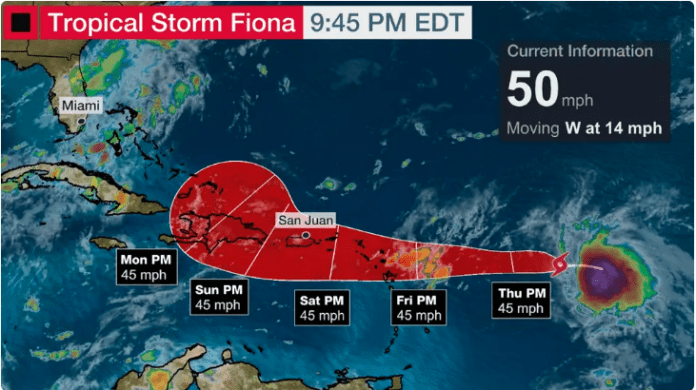 Tropical Storm Fiona has formed in the Atlantic and will impact the northeast Caribbean islands with heavy rainfall and gusty winds in the coming days.

The 2022 Atlantic hurricane season has been strangely quiet, even with recent hurricanes Danielle and then Earl remaining over the open Atlantic Ocean.

The contrast in U.S. impact this season compared to the past two seasons has been startling. B​ut the parade of disturbances coming off Africa continues in the heart of hurricane season. One of those has now become the newest tropical storm.

O​n this track, Fiona should reach the Lesser Antilles by Friday without gaining much strength.

How Much Will It Strengthen?

Tropical Storm Fiona will have to battle two typical archnemeses of tropical systems in the coming days.

Some computer forecast models suggest the system may eventually face somewhat more wind shear as it moves farther west-northwest, which could at least hamper development for a time as it moves through the northeast Caribbean islands.

Dry air is a​nother obstacle this system may face. Dry air lies ahead of its path for the next several days. This dry air has been stubbornly persistent through much of this hurricane season.

Finally, ​land interaction with the northeast Caribbean islands could also hamper further organization of this system.

Only modest intensification is forecast by the NHC because of the barriers mentioned above.

R​egardless, parts of the Leeward Islands, Puerto Rico and the Virgin Islands could see increased showers, locally heavy rain and gusty winds from Friday into the weekend.

I​s This A Mainland U.S. Threat?

I​t is far too soon to tell if Fiona will eventually become a mainland U.S. threat. O​ne reason for that is it’s still uncertain whether the system will hold together, in part due to the barriers mentioned above.

It could also curl northward into the open Atlantic next week, similar to Hurricane Earl. This may especially be the case if it holds together and becomes stronger.

-​Bahamas, Southeast U.S.: No need for concern at this time.

It’s always a good time to make sure you have a plan in place before a hurricane strikes. Information about hurricane preparedness can be found here.