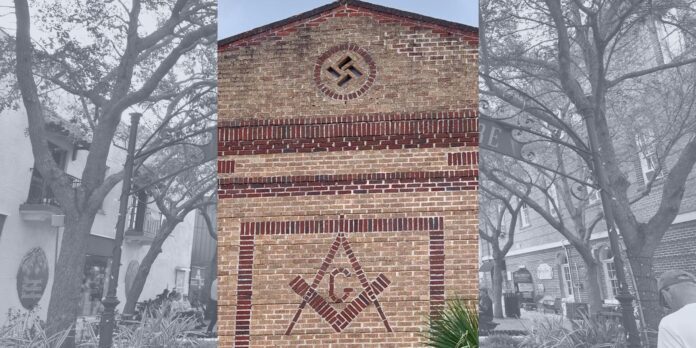 It’s a question thats been brought to us a few times. While walking down the historic streets of Cocoa Village, one may have never looked high enough to notice a brick-inlayed swastika at the apex of what’s known as the “Masonic Temple Building” at 311 Brevard Ave.

The building which was built in 1919 was also known as the Village Tower. According to mainstreethistory.com, the three-story brick building was built as the meeting hall for the Cocoa Mason Chapter that was founded in 1890 and counted nearly all local business leaders among its members. The lower floor contained the Bank of Cocoa and the US Post Office. Its second floor contained offices and the third floor was where the Masons met.

When this impressive building was completed it was the centerpiece of downtown Cocoa. The building included intricate brick work and two balconies on the second floor overlooking Brevard avenue. There was also a large, three faced, clock located at the front of the building. This clock was positioned so that the people could view the clock from both directions on Brevard avenue as well as from Harrison street. Back in the days when everyone could not afford a watch, this clock was very useful to the citizens of Cocoa. This building also was rumored to have housed a very popular “speakeasy” during the days of Prohibition.

Today the building hosts several boutique shops and businesses. According to the business owners housed in the building, and tax records, the building is currently owned by The Dexter Group, Inc in Orange California. They could not be immediately reached for comment on this article. One business owner stated she’s been asked about the symbol before and it’s her understanding that the symbol was part of the building before World War II when the ‘swastika’ was adopted by Hitler in 1939.

Before being recognized as a symbol of hate and anti-Semtism, the swastika was a very popular symbol used by many businesses and organizations all over the world. It was even a popular symbol with the Navaho Native Americans, so much so that the Arizona Department of Transportation marked its state highways with signs featuring a right-facing swastika superimposed on an arrowhead. In 1942, after the United States entered World War Two, the department replaced the signs.

The Nazi Party adopted the symbol in the 1920s, and its use in Western countries faded after the Nazi association became dominant in the 1930s. In recent decades many public swastikas have been removed or covered over, although others have been retained.

The Nazis rejected Freemasonry, banning it in January 1934, partly because it was associated with Jews.

The secrecy associated with Masonic rituals has always made the organisation susceptible to conspiracy theories. The Nazis believed that the Freemasons were part of a conspiracy working against the interests of German nationalism. Criticism of Freemasons was a regular theme in Nazi propaganda – often framed in antisemitic discourse about the threat from ‘World Jewry’.

Thousands of Freemasons were persecuted by the Nazi regime and many were imprisoned in concentration camps, classed as political prisoners.

I was not able to find another incidence where both the swastika and the Freemason symbol (The Square and Compasses) existed on the same building or sign. The fact that this building predates Nazi’s use of the symbol and their persecution of Freemasons along with Jews is quite unique. No clear explanation on the design could be immediately found.

It’s not known if anyone has ever lobbied the City of Cocoa to have the symbol removed. Its presence obviously has a tremendous emotional impact on many. Its unusual height is probably a good thing helping it go unnoticed by most who are otherwise focused on the businesses and happenings at the street level.