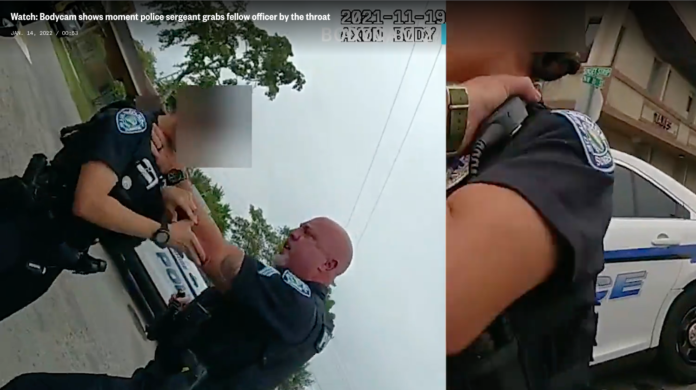 A Florida police sergeant has been relieved of his supervisory responsibilities and is under investigation after he was filmed grabbing an officer by her throat, according to officials.

Sunrise police shared body camera video of the Nov. 19 incident today, but the footage was muted with faces blurred, except for the sergeant’s. Florida statute only allows for still photos of police officers to be blurred. There was no explanation given for why the video was muted.

Police officers were arresting a “verbally and physically resistive” suspect, accused of a violent felony, when the unidentified sergeant arrived and became aggressive with him, Sunrise Police Chief Anthony W. Rosa said in a statement.

The sergeant engaged in a verbal altercation with the suspect sitting inside a patrol vehicle and “escalated” the encounter, according to the chief.

The police body camera footage showed the sergeant ducking his head inside the patrol vehicle to talk to the suspect and holding a can of pepper spray, though he did not deploy it.

Rosa called the sergeant’s behavior “inappropriate and unprofessional” and said he “unnecessarily elevated the demeanor of the suspect.”

A concerned officer ran toward the sergeant and pulled him by the back of his duty belt, Rosa said.

The video footage shows the sergeant turn around while backpedaling as he was pulled by the officer. He then momentarily places his hand at the throat of the officer and pushes her backward, until her back hits a nearby police vehicle, according to the clip and the statement from the chief. The sergeant then walks away.

Rosa said the officer who pulled the sergeant was following the department’s policies and procedures that call for intervention when there’s “imminent fear of engagements escalating unnecessarily.”

The police chief said he immediately relieved the sergeant of his supervisory responsibilities after hearing about the incident and ordered an internal affairs investigation that is ongoing.

The sergeant involved has no contact or supervision over subordinate personnel, Rosa said.

“I am very proud of the officer involved in this incident and believe that the actions taken were definitive and demonstrative of good leadership during a tense situation,” Rosa said.

He noted that Sunrise officers are expected to “de-escalate emotionally charged situations” and intervene if an officer appears to lose control or display inappropriate conduct in interacting with the public.