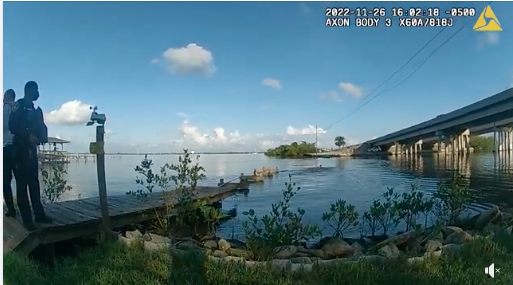 From the Cocoa Police Department

At any moment, the work of a first responder can put them in unique situations. Often, they risk everything to come to the aid of others in need. On Saturday at approximately 4 p.m. patrol officers responded to a reported vehicle crash with the vehicle ending up in the river just off SR-528.

Officer Brian Baylis was one of the first to arrive on scene. Officer Baylis saw the vehicle partially submerged. It appeared the occupants were out of the water. Officer Baylis did not hesitate to get into the water and swim to the victims to make sure they were safe. He was followed by Cocoa Firefighter EMT Jason Moylan, and Cocoa Fire Lt. Alex Candelario.

They responded to treat the driver who was later airlifted to the hospital in stable condition. The Brevard County Sheriff’s Office and Brevard County Fire Rescue also assisted. The passenger was not injured.

It appears the driver may have had a medical episode. The response and rescue were a team effort, from the dispatchers who took the call and guided officers to the scene, to the fire-rescue personnel and other officers that assisted. Together, they all made a difference for these victims.