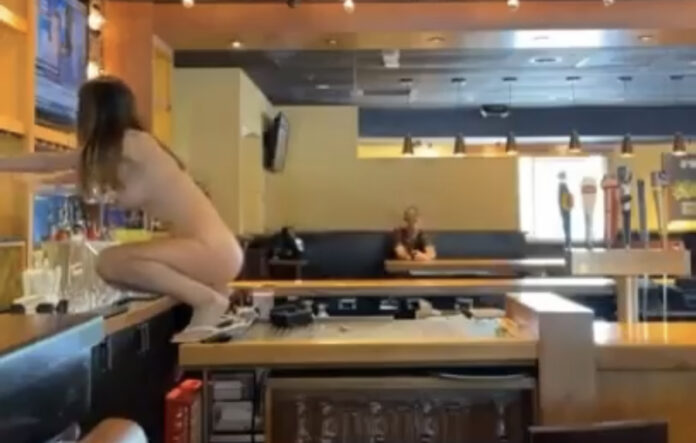 53-year-old Tina Kindred woman was charged with aggravated battery after being found naked and throwing alcohol bottles at Outback and Mojo Grill.

An Ocala Police Department officer responded to the Mojo Grill on Silver Springs Blvd because of reports of a woman “acting out of control.” The reports stated the female was topless and banging on tables and windows. Kindred had flipped over a few tables and was last seen trying to get into a customer’s car. Kindred was found driving recklessly in the parking lot, before exiting the parking lot, according to the sheriff’s report.

Prior to officers arriving at Mojo Grill, another call was received of a similar incident. The call was from the Outback Steak House on the same road. The call reported Kindred arrived naked and acting “crazy” while breaking things in the bar, according to the report.

The officer on scene opened the front doors of the business and saw glass and liquid all over the bar. Kindred was found naked with bottles in her hands. When she noticed the officer, she drew back her arm with a bottle of liquor in her hands. Kindred then threw the bottle at the officer and the officer was able to dodge it.

A second bottle was thrown at the officer’s head and touched his arm, leaving alcohol residue on him. Kindred threw another bottle and approached the officer as he was yelling, “get on the ground.” The officer used his Taser 7 in an attempt to diffuse the situation. Kindred lowered to the flood and the officer used one 5-second cycle with the Taser 7 and Kindred put her hands behind her back. Kindred was placed in handcuffs and transported to Advent Health for treatment, according to the report.

Kindred said she chose Mojo Grill because of the owner and felt as if he was not honest. She admitted she entered the business but claimed she was denied business, so she started turning tables. Kindred admitted to going inside Outback with the intent to destroy the bar, the report revealed.

When Kindred was transported to Advent Health, the medical staff discovered she had a possible fentanyl patch on her pubic area, but it was later found she did not have any narcotics in her system, except THC, the report stated.

Kindred was charged with aggravated battery on law enforcement and felony criminal mischief. Kindred was transported to the Marion County on June 1 with a bond set at $5,000. Her court date is set on July 6 at 9 a.m., jail records show, and she has not been released.