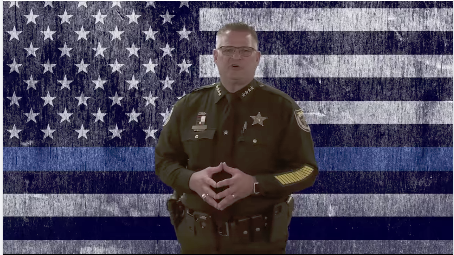 In a video interview with Giles Malone of Space Coast Daily, Brevard County Sheriff Wayne Ivey states that Kathleen Edwards is “totally responsible for what happened” to her husband Gregory Edwards, who died while in custody.

Ivey states that had Mrs. Edwards told law enforcement at the scene of her husband’s arrest that he had been “huffing,” then he would have CERTAINLY been transported to the hospital to be medically evaluated. That simply is not a true statement.

What she did disclose is that he hadn’t been taking his behavioral health medications, and exhibiting the same behaviors that led to him being “Baker Acted” during the same time last year. The statement from the witnesses on scene are consistent with this behavior where one witness states that Edwards climbed into the back of a truck, took off his shoes, fell on the stuffed animals and just started laughing. His unprovoked violent attack on the volunteer worker is further evidence of his mental state at the time.

In fact, in the 68 page investigative summary, there are dozens of statements from witnesses to the events. But one statement is markedly missing. Not once does the report show the Edwards was questioned himself about his actions. Why he did what he did, or how he was feeling. Not once in the report does it show that anyone asked him if he felt he would be a harm to himself or others. All that is documented about his condition is conflicting statements between law enforcement and on scene Brevard County Fire Rescue of whether or not he was medically cleared. Officer’s and medics on scene state that he was, while others state that he was not evaluated. The only thing consistent between both agencies is that it was determined he did not need to be transported to the hospital.

There are not statements made by anyone however, that show Edwards was suffering from symptoms of acute huffing. Kathleen Edwards revealed this information (that he had a history of huffing) to law enforcement once she learned he was in the hospital dying.

It can certainly be argued that given the behavior exhibited by Edwards on the scene, his diagnosed mental health conditions, and the statements by Mrs. Edwards that he had not been taking his medication and feared he was suicidal, that he should have been transported to the hospital for mental health evaluation and treatment. Edwards is diagnosed with Chronic PTSD, Schizoaffective Disorder, and Psychosis.

That is a much more compelling argument than that if she had said on the scene, he was huffing the day before that they would have transported him to the hospital when he wasn’t showing any signs and symptoms of huffing. In fact, it is common that individuals are transported to the jail while CURRENTLY under the influence of drugs and alcohol, let alone from someone saying that someone took drugs a day before.

The toxicology report from the autopsy also shows that there were no drugs in Edwards’ system that were evidence of huffing, and they were specifically asked to check for that. The autopsy report shows nothing relating to the act of huffing contributing to his cause of death. Edward’s health records show a long history of heavy smoking which is the likely contributor the finding of desquamative interstitial pneumonitis.

So for the Sheriff to make the statement that Mrs. Edwards is TOTALLY responsible for her husbands death is troubling at best. A strong argument can be made that had he been Baker Acted as he likely should have been, and met all the criteria for, along with the information she provided to law enforcement, none of this would have happened.

Ivey is basically saying they have no ability to take care of people under the influence of drugs – unless a family member tells them the person has been doing drugs. It’s beyond factually wrong and illogical.

Intent
The Baker Act encourages the voluntary admission of persons for psychiatric
care, but only when they are able to understand the decision and its
consequences and are able to fully exercise their rights for themselves. When
this is not possible due to the severity of the person’s condition, the law requires
that the person be extended the due process rights assured under the
involuntary provisions of the Baker Act.

Criteria
A person may be taken to a receiving facility for involuntary examination if the
following three criteria are met:

1. There is reason to believe that he or she is mentally ill. This means an
impairment of the mental or emotional processes that exercise conscious
control of one’s actions or of the ability to perceive or understand reality,
which impairment substantially interferes with a person’s ability to meet
the ordinary demands of living, regardless of etiology. For the purposes of
this part, the term does not include retardation or developmental disability
as defined in Chapter 393, intoxication, or conditions manifested only by
antisocial behavior or substance abuse impairment.

2. Because of his or her mental illness the person has refused voluntary
examination or is unable to determine whether examination is necessary;
and