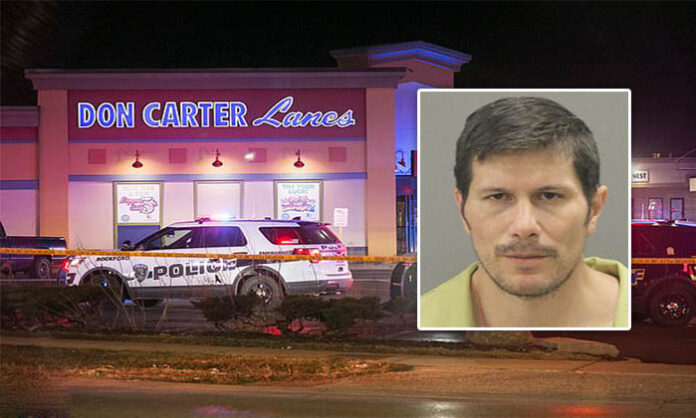 Duke Webb is an active duty special forces soldier in the U.S. Army who was named by authorities as the suspect accused in the mass shooting at Don Carter’s bowling alley in Rockford, Illinois. Three people were killed, and three others were injured. “We believe this is a completely random act,” the police chief, Dan O’Shea, said in a December 27 news conference. Webb, a sergeant, was on leave at the time of the shooting, authorities said.

Police are in contact with the U.S. Army about Duke Webb, he said. He’s facing three murder charges and three attempted murder charges. He tried to disguise himself when police arrived, according to the chief. O’Shea said the motive is not clear, but it’s not believed that the suspect knew the victims, who have not yet been named by authorities. The motive is not yet clear. A bar and carryout restaurant were open when the shooting occurred.

Witnesses described a harrowing scene in which people hid from the shooter on an upstairs bar balcony. “Trapped on the balcony ?”wrote one traumatized woman who said she was there.

Jermarrion Simmons, CEO/Chairman at Amateur Bowlers Co., named one of the victims as Jerome Woodfork in a moving tribute on Facebook. He wrote:

If you knew Jerome, then you know it was never a dull moment when you’re around him, he was a feared competitor, a great bowler, and an amazing friend. I’ve had the privilege to know Jerome since I started bowling 10 years ago, he’s always pushed me to want to be better, and always giving me some very valuable life lessons. Always told me to be confident, and to be strong, and to never give up. Jerome wasn’t your ordinary bowler, he knew that he could win, and could beat anyone on any given day, and he would let you know that, and he knew he could back himself up. That’s why so many respected him. Jerome buddy you will be missed by everyone, we love you, and I wanna say thank you for impacting my life in so many ways. Fly high buddy.

The business also houses a carry-out restaurant, and teenagers who were wounded in the mass shooting were just there to pick up food, police said.

“UPDATE: 37-year-old white male suspect is in custody. There are no others being sought at this time,” Rockford police tweeted on the evening of December 26.

Two hours before, police wrote, “Please continue to stay away from Don Carter’s area on East State Street. It’s still an active situation and officers are continuing to clear the area.”

Webb is a “special forces assistant operations and intelligence sergeant assigned to 3rd Battalion, 7th Special Forces Group (Airborne), located at Camp Bull Simons, Eglin Air Force Base, Florida. He joined the Army in 2008 and was on leave at the time of the shooting,” according to the Rockford Register Star.

“We are shocked and saddened to learn about this tragic event and our thoughts and prayers are with the families of those killed and wounded,” said Col. John W. Sannes, commander of 7th Special Forces Group (Airborne) told the newspaper.

“The Army will continue to provide full assistance to the Rockford Police Department as they continue investigating this incident.”

Duke Webb was described by the police chief as a resident of the state of Florida and a current active military member. Online records show he has past ties to Missouri. It’s not clear why he was in Rockford the day after Christmas. However, family posts on Facebook indicated he has relatives who live in Illinois, including in the Rockford area.

His sister, who was from Sikeston, Missouri, died at age 40 in 2019, according to her obituary. That obituary says that Webb also has a brother. His brother lives in Illinois, about three hours from Rockford in Glen Carbon.

The above video, from outside the bowling alley, captured the sound of multiple gunshots as well as arriving first responders.

“There’s cops everywhere. There are so many gunshots, someone’s dead,” a man says in the video.

Amanda Hollenbeck, who witnessed the mass shooting said: “We arrived went upstairs, ordered our drinks.. and heard the first shot… It took a minute to register.. it was a disaster. Then 3 more, then a man got shot upstairs … His eyes were lifeless. We were cornered.. on the balcony… As he’s shooting, another shot, boom boom four more.. 3 more.. someone got shot on the balcony right by us.. behind the tent. So, so, so scary.” She didn’t hear the gunman say anything.

There were 20-25 people inside the building at the time of the mass shooting, according to the chief. He said it was under investigation why Duke Webb was in Rockford.

O’Shea said police believe that the mass shooting was “random.” Two handguns were recovered at the scene, said the chief.

“This is an obvious active shooter,” he said, adding that the gunman was still in the building when officers responded. Officers did not fire their weapons. He said he believes the “one suspect who did all of the shooting is in custody along with all of the weapons.”

A survivor named Matt told the site Rockford Scanner that he had just gotten to Don Carter’s lanes with his girlfriend. “We were in the upstairs bar.” The downstairs area was closed due to COVID.

“We ordered our drinks and a couple shots came off from downstairs,” he said. People started running outside. “Everyone upstairs knew this was a shooter… we all start screaming, and we run out into the back balcony… more shots are going off, more shots are going off. I’m on the phone with 911 tucked behind a corner with 5 or 6 other people.”

He said a police van “just happened to go by.” A man jumped off the balcony to get help. “He hit his head when he landed. And he’s gone.” The dispatchers asked if he could see the shooter.

“Five-10 seconds later, shots rang out on the deck. He shot someone on the deck. There was someone lying on the floor of the bar who was also shot.”

When police escorted people out, “I believe the shooter was still in the building,” Matt said.

Authorities had not yet released the names of the victims, but they did say teenagers were among them. The police chief said those shot and killed were all males, ages 73, 69 and 65.

A 14-year-old boy who was shot in the face but survived.

A 16-year-old female who was was shot in the shoulder; she has been treated and released from a local hospital.

A 60-year-old male who suffered multiple gunshot wounds, underwent surgery overnight and is in critical condition.

Jamar Luster, who owns Ripe Life Juice Co., wrote on Facebook, “Last night I watched a young Black man jump out his car with his Dad and run to the police and ambulance with his hands up bc he was shot in the face. They pulled guns on him immediately before he collapsed begging for help Looks like they caught the shooter without a fight tho! Smh!”