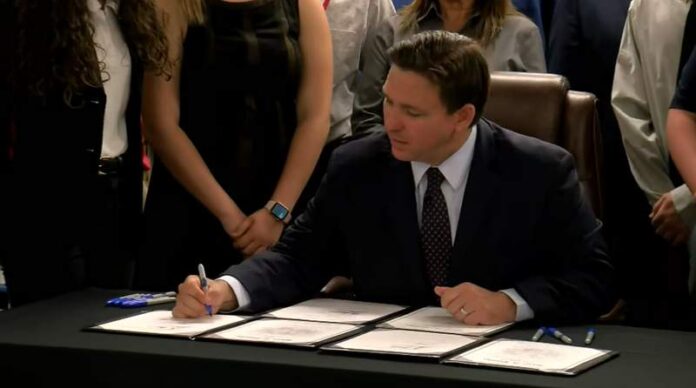 Public universities in Florida will be required to survey both faculty and students on their political beliefs and viewpoints, with the institutions at risk of losing their funding if the responses are not satisfactory to the state’s Republican-led legislature.

The unprecedented project, which was tucked into a law signed Tuesday by Republican Gov. Ron DeSantis, is part of a long-running, nationwide right-wing push to promote “intellectual diversity” on campuses — though worries over a lack of details on the survey’s privacy protections, and questions over what the results may ultimately be used for, hover over the venture.

Based on the bill’s language, survey responses will not necessarily be anonymous — sparking worries among many professors and other university staff that they may be targeted, held back in their careers or even fired for their beliefs.

According to the bill’s sponsor, state Sen. Ray Rodrigues, faculty will not be promoted or fired based on their responses, but, as The Tampa Bay Times reported Tuesday, the bill itself does not back up those claims.

The only details on the survey come via a passage over its purpose, to discover “the extent to which competing ideas and perspectives are presented” at public universities, and whether students “feel free to express beliefs and viewpoints on campus and in the classroom.”

“It used to be thought that a university campus was a place where you’d be exposed to a lot of different ideas,” DeSantis said at a press conference following the bill signing. “Unfortunately, now the norm is, these are more intellectually repressive environments. You have orthodoxies that are promoted, and other viewpoints are shunned or even suppressed.”

Republicans have long held that universities promote left-wing ideologies and discriminate against conservative students and staff.

Though the bill does not specify what the survey results will be used for, both DeSantis and Rodrigues suggested that the state could institute budget cuts if university students and staff do not respond in a satisfactory manner.

“That’s not worth tax dollars and that’s not something that we’re going to be supporting moving forward,” DeSantis said.

When pressed by reporters, the governor did not offer any specific examples of repression and discrimination faced by conservative students, simply saying that he knows “a lot of parents” who worry about their children being “indoctrinated” on campus.

Florida Senate President Wilton Simpson was more pointed in his criticism Tuesday at a meeting of the state university system’s Board of Governors, calling the institutions “socialism factories” — again without much detail on what makes the schools so left-wing.

“We always hear about the liberal parts of the university system, and we don’t hear so much of that from the college system,” he said, according to The Tampa Bay Times.

In addition to the survey, the bill also prevents officials from limiting campus speech that “may be uncomfortable, disagreeable or offensive” — a measure that, as Democrats in the state Legislature pointed out, will also make it easier for groups like the KKK or the Proud Boys to hold events on campus.

In a conversation with the Miami Herald this April, Barney Bishop, one of the top lobbyists pushing the bill in Florida’s state legislature over the past year, shone a light on the justifications behind such measures — which he said were less about “intellectual diversity” and more concerned with maintaining the country’s conservative Christian identity in the face of younger, more diverse generations that share a dimmer view of religious right-wing orthodoxy.

Bishop also told the paper he “certainly hopes” the effort will expand into the K-12 system over time.

“I think the problem isn’t just in higher ed. The truth of the matter is that kids are being indoctrinated from an early age,” he said.

“I think that those of us who have diverse thinking and look at both sides of the issue, see that the way the cards are stacked in the education system, is toward the left and toward the liberal ideology and also secularism — and those were not the values that our country was founded on. Those are the values that we need to get our country back to.”