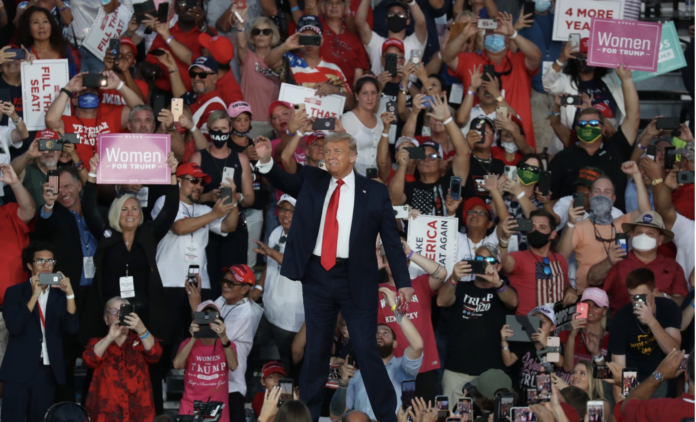 President Trump on Saturday promised a “wild” protest in Washington, D.C., on Jan. 6, as he continued to deny that he lost the election.

“Statistically impossible to have lost the 2020 Election,” he tweeted. “Big protest in D.C. on January 6th. Be there, will be wild!”

On Jan. 6, Congress will meet to accept the presidential election results. Presidential electors cast their votes last week in the Electoral College giving Biden the necessary 270 electoral votes to win.

Trump’s legal team has said it intends to continue fighting the results.

Trump linked to a report by Peter Navarro that claims without evidence that the amount of election fraud was sufficient to swing the election.

Senate Majority Leader Mitch McConnell asked his Republican colleagues in the Senate not to contest the election results on Jan. 6, when a joint session of Congress formally accepts the count.

McConnell’s move could effectively end any hopes of a last-minute reprieve for the president. A majority of both chambers of Congress (including the Democratic-controlled House) would be needed to upend the election results.

Meanwhile, Trump has been critical of those in his party who have accepted Biden’s victory.

After McConnell recognized Biden as president-elect in a Tuesday speech on the floor of the Senate, Trump responded by calling on him and other Republicans to “get tougher.”

“.@senatemajldr and Republican Senators have to get tougher, or you won’t have a Republican Party anymore. We won the Presidential Election, by a lot. FIGHT FOR IT. Don’t let them take it away!” Trump charged on Twitter.