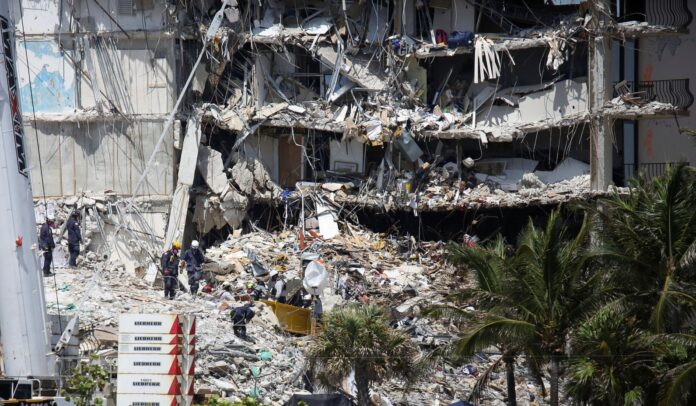 This is a tragedy, not an election. Those pressing it into a partisan narrative are broken.

Hey, you. Yes, you. The one with his hands arched above the keyboard, debating whether to press “Send” on your Surfside hot take. Don’t. Delete it, step away from the computer, go outside for a while, and reflect upon what you’ve become.

Yesterday, the Washington Post’s Hannah Dreier tweeted that “There’s a saying in emergency management: The first 24 hours are the only 24 hours. FEMA was ready to deploy to the condo collapse almost immediately, and included the crisis in its daily briefing, but didn’t get permission from Gov. DeSantis to get on the ground for a full day.”

This is nonsense from start to finish. Worse still, it is nonsense that does an extraordinary disservice to everyone involved in responding to this disaster. Not only were the appropriate teams on location at Surfside as soon as they were made aware of the collapse, but those teams were precisely the same Urban Search & Rescue units that FEMA would have sent had it been involved from the get-go. There was no delay here. There was no bureaucratic feet-dragging. There was no lack of help of any kind. The mayor of Miami-Dade, Daniella Levine Cava, has confirmed that, from the start, “the state of Florida been here in force,” adding that her county has “not lacked for any support.” The mayor of Surfside, Charles Burkett, has confirmed that the town is “drowning in resources.” And, indeed, it is. As Florida’s state fire marshal recorded yesterday, the effort underway in Surfside is the largest non-hurricane-related rescue operation the state has ever mounted.

And FEMA? That authorization process followed the standard pattern and ran along a standard timeline. The disaster was reported just after 1:30 a.m. on June 24. Within minutes, the first responders of Miami-Dade County had rushed to the site. By 2:30 a.m., the Florida emergency-management division had been activated. By 8 a.m., with the emergency-management department already in overdrive, Governor DeSantis had called the mayors of Surfside and Bal Harbor. By 11 a.m., DeSantis had arrived in Surfside to review the situation himself, to meet personally with Mayor Cava, and to ask if there was anything more he could do. At 4:33 p.m. that afternoon, the mayor signed a local emergency declaration for the county, and, in turn, asked DeSantis to sign one for the state; 59 minutes later, at 5:32 p.m., DeSantis issued that declaration; and the following morning, on June 25, Biden signed the authorization to deploy FEMA. Nobody — at any level of government — has complained about this process.

Okay. But what of our ongoing debates about the merits of our two political parties, or our fights over infrastructure or regulation? Doesn’t this incident fit in there? No, it does not. President Biden is a Democrat. Governor DeSantis is a Republican. Mayor Cava is a Democrat. Mayor Burkett is non-partisan. All of them have praised each other’s work. Moreover, when the last inspection of the building was performed (in November of 2018), none of them were in office. Neither Biden nor DeSantis has anything to do with the regulation or inspection of private buildings such as Champlain Towers. And, while both Cava and Burkett indirectly do, both were elected in 2020 — two years after the building was inspected. This isn’t a question of federal, state, or local infrastructure. It’s not a question of government regulation. It simply does not fit into our usual political fights.

What of the inspection report? Can we blame Ross Prieto, the local building official who was in charge at the time it was issued? The Miami Herald reports that Prieto was, indeed, forwarded a document noting “major structural damage” to the building, and that, despite this, he assured residents at a town meeting that the building was “in very good shape.” Which all sounds rather damning until one learns not only that the relevant portion is buried on page seven, but that it was not highlighted or mentioned anywhere else within the documents. And why not? Well, because it wasn’t the dire warning that the press has made it out to be. As the Washington Post reports, the “longtime engineer hired by the town of Surfside to analyze possible causes of the tower collapse” has poured cold water upon the idea that the report Prieto was sent should have “raised a red flag.” The “media coverage of the inspection,” Allyn Kilsheimer has said, “is “overblown.” The report’s “finding is fairly typical.”

At the end of J. B. Priestley’s famous play An Inspector Calls, everyone involved realizes that the tragedy at hand is in some way their fault. What has happened in Surfside should drive honest onlookers to the opposite conclusion: That, sometimes in this imperfect world of ours, truly horrific things can happen to good people, and there is nothing of use to be gained by trying to weave them neatly into a broader political rationale. Not everything is ideological. Please: Just stop.