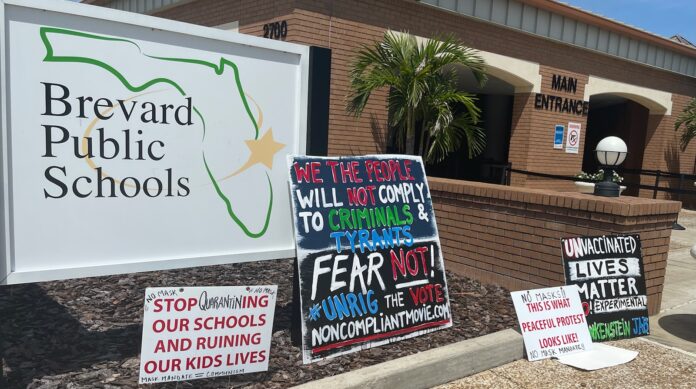 142 public speakers signed up to speak at this morning’s Brevard County Public School’s emergency meeting to address mask mandates in schools. The meeting was requested by School Board member Jennifer Jenkins after a judge struck down Governor Ron Desantis’ ban on mask mandates by schools, ruling it illegal.

School Board member Matt Susin voted against having the meeting this morning, and was on record after the judge’s ruling stating we should wait for the judicial system to make a final ruling on the matter, which he believes will go to the Florida Supreme Court. The other 4 members voted in favor of having the meeting.

Members of the rowdy audience had to be reminded repeatedly by Chair Misty Belford to stop heckling and commenting out of order. There was also a strong law enforcement presence inside and outside the meeting. In prior meetings, individuals had to be physically removed from the meeting due to their behavior.

Speakers from the community included parents, teachers, scientists, physicians, and other professionals, all of which only had 1 minute to speak due to the volume of speakers and it being an emergency hearing, as opposed to the traditional 3 minute time limit for each speaker.

During debate, School Board Chair Misty Belford states “31% of the positive cases in our County have come from our schools, even though our schools only make up 11% of the population.” She also said, “I don’t think that masks are the silver bullet, but what we are currently doing is not working.”

School Board member Matt Susin was completely against the measure, and repeated mostly, often yelling, all of the points made by State Representative Randy Fine in his Facebook live video the day before. Fine’s video was full of misinformation and hyperbole, and he did show up to the meeting briefly, but did not ask to speak. He previously made several Facebook posts over the weeks promising Brevard County would never have a mask mandate.

Following the vote, Fine made a facebook post encouraging parents to withdraw their children from public schools and attend a private school or virtual school. Fine is currently under multiple criminal investigations by the Florida Department of Law Enforcement for cyber intimidation, and cyber stalking. Felony charges are also being considered for threats he made to the school board as well.

School Board member Katye Campbell stated although she is not in favor of a mandate, should it pass, her and her children will abide by it. She offered an amendment to the motion to add a limited time frame to the mandate to change the policy to a 30 day limit and then revisited by the board. That motion was passed 4-1 with Susin against it.

The board ultimately voted 3-2 in support of a mask mandate with Katye Campbell and Matt Susin against it. It is effective immediately for 30 days with only a medical opt-out. A 5 day grace period for enforcement is being allowed for those who need an exemption to get one from their healthcare provider.

After the vote, several individuals had to be removed by law enforcement for disruptive behavior.

After the vote, Mrs. Campbell immediately put her mask on for the remainder of the meeting.