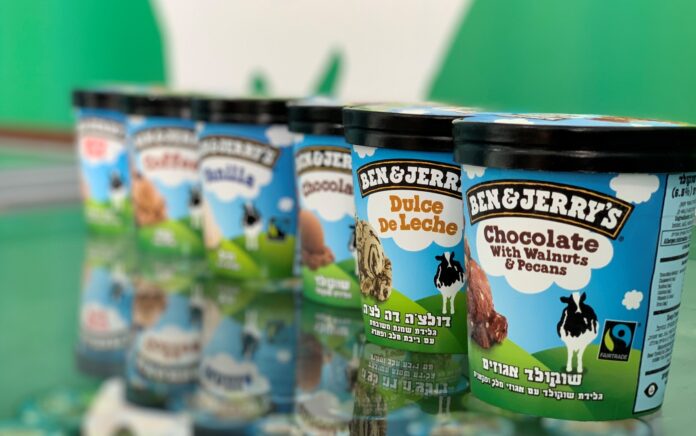 Ben & Jerry’s announcement on Monday that it would stop selling ice cream in the occupied Palestinian territory has sparked a wave of criticism from Democrats and Republicans, opening up renewed debate over the Boycott, Divestment, and Sanctions (BDS) movement.

The BDS movement is a non-violent, global effort that began in 2005 to put external pressure on the Israeli government in order to change its policies toward and treatment of Palestinians.

Ben and Jerry’s has effectively echoed such critiques via its cessation of sales in the occupied Palestinian territory, while giving a highly public boost to BDS. “We believe it is inconsistent with our values for Ben & Jerry’s ice cream to be sold in the Occupied Palestinian Territory (OPT),” the company said.

BDS, which is modeled after the boycotts targeting apartheid South Africa, promotes boycotts of Israeli businesses, cultural institutions, and organizations. It also urges companies to stop doing business in Israel.

Omar Barghouti, a BDS co-founder, said Ben & Jerry’s decision was “quite significant,” per the Associated Press.

“It shows you cannot have business with an apartheid state without being complicit,” he said. “We expect more socially responsible companies to follow suit, perhaps less publicly.”

Critics of the movement have decried it as anti-Semitic, and many states have anti-BDS laws on the books. The Biden administration has vocally opposed BDS. State Department spokesperson Ned Price on Monday would not comment directly on the ice cream company’s decision, but did state that the Biden administration “firmly” rejects BDS. Price said the movement “unfairly singles out Israel.”

Ben & Jerry’s said it’s not boycotting Israel, just the Palestinian territories it occupies, and “will stay in Israel through a different arrangement.” But Israeli leaders have excoriated the company over its decision and are urging states with anti-BDS laws to activate them against it.

Israeli Prime Minister Naftali Bennett said the company had branded itself as “the anti-Israeli ice cream.”

The president of Israel, Isaac Herzog, said the move amounted to a “new kind of terrorism.”

But there are progressive proponents of BDS in Congress, and the movement had gained traction on college campuses across the US.

As the conversation on US relations with Israel shifts in Washington, with Democrats increasingly breaking the taboo of criticizing the top US ally in the Middle East, BDS is poised to continue to be a thorny issue.

On Tuesday, New York City Mayor Bill de Blasio said he won’t be eating his preferred Cherry Garcia flavor “for a while,” outlining his disagreement with the ice cream company’s decision.

“You cannot have peace if you undermine the economic reality and create division,” the outgoing mayor said, according to WABC. “I just believe it’s the absolute wrong approach and I don’t think Ben & Jerry’s should be doing that.”

Both Republican and Democratic state legislatures have enacted laws punishing companies involved in BDS, such as in Texas, where pension funds must divest from any company boycotting Israel.

Texas Gov. Greg Abbott, a Republican, sent out a statement on Thursday condemning Ben and Jerry’s for refusing to sell their product in Israeli settlements.

“Ben and Jerry’s decision to boycott parts of Israel is disgraceful and an insult to America’s closest ally in the Middle East,” Abbott’s spokesman told CNBC in the statement. “Unilever, Ben and Jerry’s parent company, must reverse this ill-conceived decision.”

In a letter sent to Ben & Jerry’s CEO Matthew McCarthy on Thursday, Patronis wrote, “It is my belief that Ben & Jerry’s brazen refusal to do business in Israel will will result in your placement on the Scrutinized Companies that Boycott Israel List.”

The missive, which was seen by CNBC, also said the state would then “be prohibited from investing in Ben & Jerry’s or its parent company, Unilever.”

Being added to the list also means the company won’t be able to enter or renew contracts with the state or any municipality in Florida.

Airbnb was the last company to find itself tangled in a similar issue. In 2018, the rental site said it was banning listings of Israeli property in the West Bank, territory Palestinians claim should be part of their state.

The owners of Ben and Jerry’s, Ben Cohen and Jerry Greenfield, have been vocal about politics for some time. Back in June, the pair served ice cream at a protest against qualified immunity protections for police officers outside of the New York State Capitol in Albany.

Both are also longtime supporters of Sen. Bernie Sanders, a fellow Vermonter. Sanders, who has played a key role in the shift in rhetoric on US-Israel relations in Washington, in 2019 voted against an anti-BDS bill. The Vermont senator, who is Jewish and briefly lived in Israel, at the time said he did not support the BDS movement but contended that the bill would violate the First Amendment rights of Americans.

Other progressives like Democratic Reps. Rashida Tlaib of Michigan and Ilhan Omar of Minnesota have offered full-throated support to BDS.