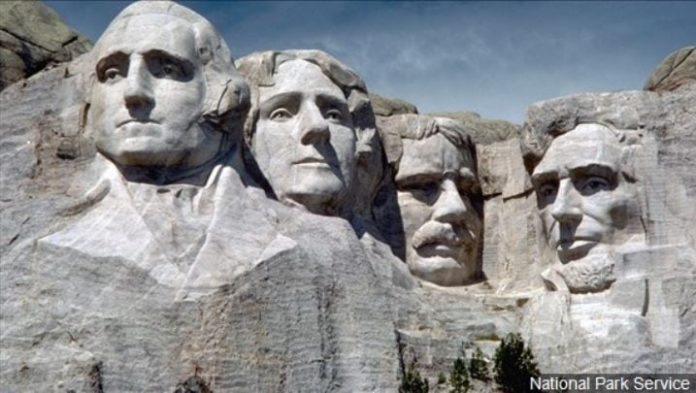 In the latest of a myriad of unusual Facebook posts, Representative Randy Fine (R-Melbourne Beach), unprovoked said he is ready for a Civil War with anyone who would threaten to destroy Mount Rushmore. The post was not received well by even his most loyal followers.

Of the 297 comments (most of which were deleted by Fine) most were questioning the thought process of Fine and the motivation of his post. To most, there was no knowledge of anyone in this area making such a threat. It was also not clear how the alleged protestors could destroy a mountain.

One commenter warned that before he consider waging civil war that he visit Gettysburg. Fine said he has and that’s why he is ready to fight.

Fine was also questioned about the accuracy of his post as it is disputed if the monument is even part of United States land, referencing a broken treaty between the US Government and Native Americans and pointing out the monument was created by a member of the KKK.

Fine’s post came after losing badly in the first Republican Staw Poll yesterday to his Republican Challenger Marcie Adkins who won with 63% of the vote.

From the Associated Press:

For many Native Americans, the 79-year-old Mount Rushmore, with four white faces carved into the granite, is a symbol of similar oppression, especially offensive because it’s located in South Dakota’s Black Hills, which they regard with reverence.

“Nothing stands as a greater reminder to the Great Sioux Nation of a country that cannot keep a promise or treaty then the faces carved into our sacred land on what the United States called Mount Rushmore,” Chairman Harold Frazier of the Cheyenne River Sioux Tribe said in a statement. ”We are now being forced to witness the lashing of our land with pomp, arrogance and fire hoping our sacred lands will survive.”

While many Americans view Presidents George Washington, Thomas Jefferson, Theodore Roosevelt and Abraham Lincoln as great leaders, others are reminded of their controversial pasts.

Washington and Jefferson both owned slaves; Roosevelt promoted the country’s westward expansion, leading to the desecration of Native lands and peoples by white settlers.

According to the Associated Press, Roosevelt is even reported to have said, “I don’t go so far as to think that the only good Indians are dead Indians, but I believe nine out of every 10 are.”

And Lincoln, though celebrated for having led the emancipation of black slaves, approved the hanging of 38 Dakota Native American men, according to the Library of Congress. It was the largest government sanctioned mass execution in U.S. history.

Mount Rushmore historian Tom Griffith told the AP the sculptor of Mount Rushmore, Gutzon Borglum, was a member of the white supremacist Ku Klux Klan. Though Griffith said Borglum’s allegiance to the Confederacy was more practical than ideological, his affiliations nonetheless stood for hatred and inequality.

The monument is also a reminder to Native Americans of the countless treaties broken by the U.S. government.

In 1868, the Fort Laramie Treaty guaranteed a permanent “Great Sioux Reservation” to the Sioux tribe, which included the Black Hills. Under this agreement, “no treaty for the cession of any portion or part of the reservation” could be sold or traded unless 75% of “adult male Indians” agreed to the change.

But despite this treaty establishing the Black Hills as part of a reservation, white settlers began moving onto Lakota land searching for gold. Tribes in the area tried to fight them off, but they were also facing a threat of starvation as many of the bison herds in the area were destroyed.

After years of legal challenges, the Supreme Court in 1980 upheld the Indian Claims Commission’s ruling that the taking of the Black Hills was illegal under the Fifth Amendment, based on the fact that 75% of the tribe’s men had not consented to the agreement.

In a time with the nation is arguably more divided than ever since the Civil War, Fine’s comments promote more division instead of unity within the United States.

Later today, Fine went on to renew his attacks on several elected Veterans for declining his offer to accept his campaign funds for a fireworks display and went as far as to call them unpatriotic and protesting against America. Fine himself has never served in the military.