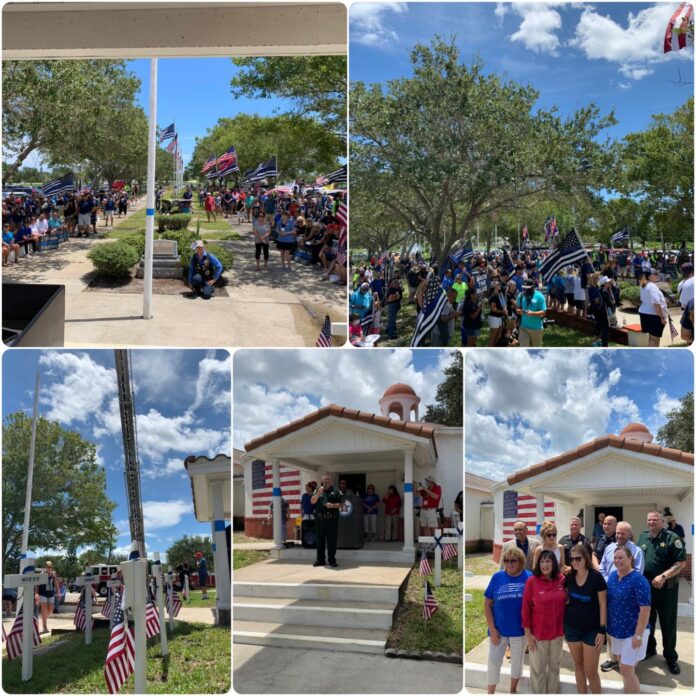 Femme Fatale Arms and Training hosted a “Back The Blue” rally at the Liberty Bell Museum in Melbourne on Sunday, August 16th. Sheriff Wayne Ivey made his presence at the rally known with a speech denouncing calls to defund the police, alongside members of the Brevard County Sheriff’s Office (BCSO).

A Facebook post made by the BCSO states that the rally was “extremely well attended” with 300 attendees. In comparison, the March for Justice on June 6th in Brevard County was attended by approximately 3,000. The March for Justice called for BCSO to end the use of vascular neck restraints and to release the video of Gregory Edwards, who died in BCSO custody.

The “Back The Blue” title and abundance of “Blue Lives Matter” flags at the event represent support for law enforcement. The Blue Lives Matter flag, a black-and-white American flag with a blue line in the center, often appears in response to Black Lives Matter content. It is often seen alongside the Confederate flag and waved by white supremacy organizations, reflecting the flag’s racist origins.

Protesters stood outside the Back the Blue rally, shouting “release the video,” “you’re being sued,” and “shut up,” as Sheriff Ivey spoke.

At the Back the Blue rally, photos and attendees confirm that mask wearing was not required and rarely observed. The state of Florida has continued to report approximately 6,000 new COVID-19 cases per day in the month of August.