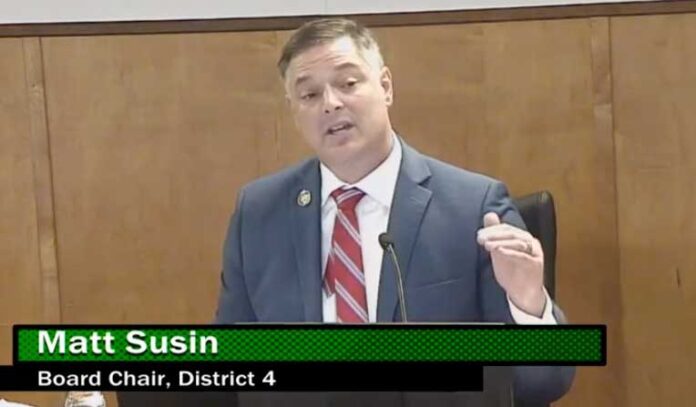 It has been 5 weeks since Brevard School Board Chair Matt Susin held that infamous press conference in front of the Brevard County Jail along with Sheriff Wayne Ivey, where he announced creating “the most prolific discipline policy the school board has ever had.” To date, not one word of the existing policy prior to the press conference has changed.

To be clear, the exact policy that was voted for by Mr. Susin just this past February, and created by him and the rest of the board in 2019, is still the exact same policy in place today. There have been several special/emergency meetings since the initial press conference, but actually no changes to policy have been made.

In contrast however, in a school board meeting just before winter break, after announcing the “zero tolerance” positions, Mr. Susin, along with the 2 newly elected School Board Members Gene Trent, and Meghan Wright voted against the recommendation of the Superintendent to terminate the employment of a teacher who violated the District’s drug policy.

Photos of the teacher allegedly using drugs were sent to the district. Being a federal drug free workplace, the District’s policy is to conduct drug testing when there is a reasonable suspicion that an employee has violated the drug free policy. Refusal to submit to the drug screening is considered the same as a positive result, and automatic grounds for termination. This teacher refused to submit to the test, and was recommended for termination.

School Board Members Jennifer Jenkins and Katye Campbell concurred with the recommendation to follow the policy and terminate her employment, but were in the minority. The teacher was retained with a vote of 3-2 in favor of not firing her. This same teacher will now be expected to enforce the “zero tolerance” policy upon her students.

The district may be at risk for losing federal funding now as well for not being in compliance with the federal drug free workplace policy.

Another issue Mr. Susin brought up today with Channel 6 during his interview was the enforcement of the cell phone policy, which has been stated has been a chronic problem with students using the phone during school hours.

“What we were having a problem with is the teacher would say, ‘Hey, could you put away your phone?’ and then the student would say, ‘No,’” Susin said. “Now we’ve said you can take that phone. We’ll have (school resource officers) or administrators coming in to take those phones in the event they’re trying to teach.”

We reached out to the district today for clarification on Mr. Susin’s statements. Specifically having school resource officers physically taking phones from students.

Sheriff Ivey has made it clear that his department is “not in the discipline business.” School staff also do not give direction to school resource officers who are contracted with the district to provide security. School administration has no authority over them.

The District Communications Director stated that “Staff will handle any issues with cell phone usage on our campuses, per current policy.”

Parent have expressed concerns over how these zero tolerance policies will be enforced, especially on children who are 4 and 5 years old, or children with disabilities or developmentally delayed.

“Are we going to arrest a 4 year old that threw a tantrum, and expel them from school because they hit a teacher during a fit,” one parent expressed. There was no clear answer to his question from the board. So the real question becomes, what does zero tolerance really mean?

Mr. Susin has been accused of playing both sides of the street, trying to please everyone in order to gain support for his upcoming run for Florida State House in 2024.