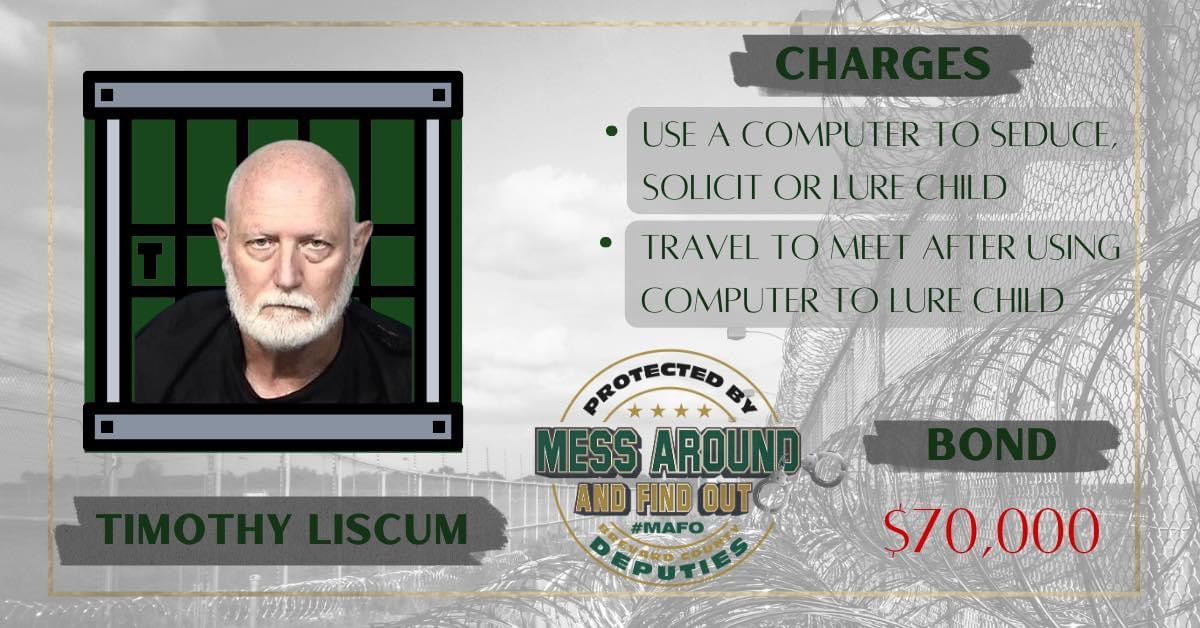 Earlier today Agents from the Brevard County Sheriff’s Office Sex Offender Registration and Tracking Unit (SORT) arrested 64-year-old, Timothy Liscum of Melbourne, after he traveled to a location in Brevard County expecting to meet a minor child for the purpose of having sexual relations.

Liscum, was a teacher at Satellite High School and had been communicating through an electronic device with an actual student at the school.

The student became concerned about the content of the conversations and told another student, as well as a trusted teacher, who immediately reported the information to school administrators. The administrators contacted the Satellite Beach Police Department who requested assistance with the investigation from BCSO Sex Offender Registration and Tracking Unit.

As a result of the request for assistance, Agent Aja Stake took over the online identity of the child and during subsequent conversations, Liscum, thinking that he was still talking to the child, solicited the student to meet for the purpose of having sexual relations. Much to his surprise, Liscum was arrested when he arrived at the pre-determined location and was taken into custody for Use of a Computer to Solicit a Child and Travel to Meet After Use of a Computer to Lure a Child. Liscum was transported to the Brevard County Jail.

The investigation is still on-going in an effort to identify any other potential victims, as Liscum has been employed with the Brevard County School Board for the last 30 years. Anyone who may have additional information about Timothy Liscum is asked to please call Agent Aja Stake at (321) 633-8410 or CRIMELINE at 1-800-423-TIPS (8477).

3 years ago Charles Edward Krininger III, a Satellite Beach teacher in Brevard County since 2002 was arrested was molesting a female student.

The victim told police that Krininger asked her to stay after school because of comments she’d made during class. She said Krininger talked to her about sex and asked her to send him videos touching herself via Dropbox.

Before she left, Krininger made the victim pinky swear she wouldn’t tell anyone, according to the arrest affidavit. Subpoenas found that Krininger had accessed the Dropbox on the victim’s phone.

Krininger, had been warned in the past by Satellite principal Mark Elliot for making “inappropriate and offensive comments” to students in his class, according to a press release from Brevard Public Schools.