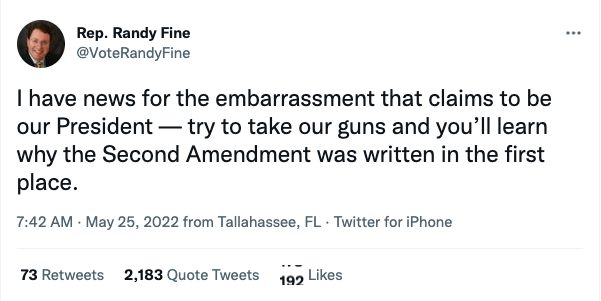 State Representative Randy Fine posted two similar posts on Facebook and Twitter less than 24 hours after the mass school shooting at a Texas elementary school, what some consider a direct threat to President Biden’s life.

The post has received thousands of comments with individuals tagging the FBI, CIA, and Secret Service.

Just last year, a 21-year-old Kentucky man whom Florida investigators said made a private Instagram post saying he would ‘eat’ the family of State Rep. Randy Fine alive and warned him to ‘watch what you say,’ was arrested in Brevard County.

“I get death threats all the time,” Fine told FLORIDA TODAY on Sunday. “This one crossed the line. I think people can disagree with politicians but you can’t threaten to kill them.” Fine, who received the message via Instagram, added that he never responded to the comment.

Fine has been greatly criticized in the past by his constituents for being weak on the 2nd amendment, and received a poor rating from the NRA for his voting record. He has been trying to repair that image now that another election is coming up.

Fine has been under tremendous backlash from the second amendment community and constitutionalist for supporting the “Parkland Bill” which took gun rights away from 18-20 year-olds and increased waiting time to 3 days to purchase firearms. Fine promised to file legislation the next session to reverse these items during his campaign, but never did.

efends his vote on prohibiting anyone under 21 from purchasing by saying they can just ask their parents for a gun, which some say walks the line of promoting straw man purchases which are illegal. Along with the NRA, Florida Gun Rights sent out mailers showing that Randy Fine illegally blocks and censors citizens on social media pages who voice their opinions about him.

He is no doubt trying to repair his image with the 2nd Amendment community in the most extreme way. The 1st Amendment however, not so much.

The owner of Florida Politics, Peter Schorch who has been a big promoter of Fine even came out against him over his message this morning. Fine at one time called him one of the best journalists in the state.