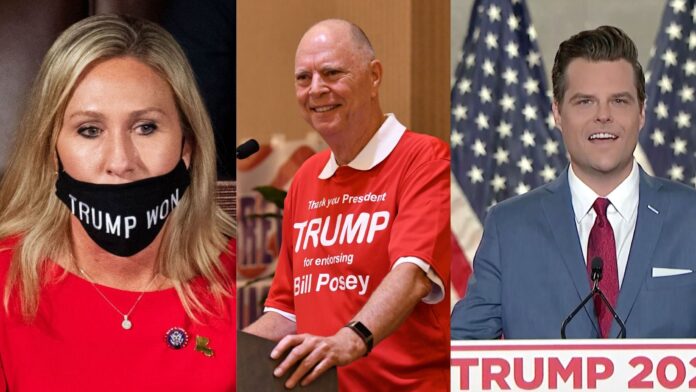 Rep. Marjorie Taylor Greene has just signed on to the “Old Glory Only Act,” joined Florida Reps. Matt Gaetz and Bill Posey to prohibit the raising of any other flag other than “Old Glory” over U.S. embassies and consulates.

Trump denied requests to fly the Gay Pride Rainbow Flag over three U.S. embassies in 2019. President Joe Biden will now allow the Pride flag and possibly other non-U.S. flags to be hoisted up flagpoles around the world. Secretary of State nominee Anthony Blinken says he will appoint an envoy for LGBTQ+ rights and let the U.S. embassies display the LGBTQ+ Pride flag without restrictions.

“We’ve seen violence directed against LGBTQI people around the world increase,” Blinken said. “We’ve seen, I believe, the highest number of murders of transgender people, particularly women of color, that we’ve seen ever.” That’s definitely true in the U.S., where at least 44 trans people died by violence in 2020, the highest number since records have been kept, and the situation is dire in many other countries as well.

“And so I think the United States playing the role that it should be playing in standing up for and defending the rights of LGBTQI people is something that the department is going to take on and take on immediately,” he added.

None of those who have signed the Old Glory Act, directly denounced the now infamous flying of the Confederate Battle Flag in the United States Capitol Building on January 6th.

The ”Old Glory Only Act” reads as follows:

To prohibit the flying of any flag other than the United States flag over United States diplomatic and consular posts, and for other purposes.

Be it enacted by the Senate and House of Representatives of the United States of America in Congress assembled,

This Act may be cited as the “Old Glory Only Act”.

The Secretary of State shall ensure that no United States diplomatic or consular post flies any flag other than the United States flag over such post.