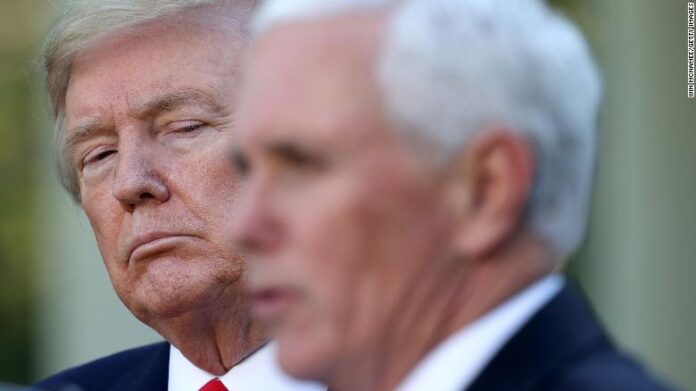 Vice President Mike Pence on Wednesday publicly split with President Donald Trump, saying in a letter to Congress that he cannot submit to demands he overthrow the results of the election.

Pence formalized his views in a letter to lawmakers, declaring he has no “unilateral authority to decide presidential contests” and could not change the results of the election.

“It is my considered judgement that my oath to support and defend the Constitution constrains me from claiming unilateral authority to determine which electoral votes should be counted and which should not,” he wrote.

As president of the Senate, his role is purely ceremonial: he will open envelopes, present them to “tellers” and announce the winner at the end.

And on Wednesday morning, Trump made the false claim on Twitter that Pence has the power to reject states’ certification, delaying the process and ultimately giving him the win.

“Do it Mike, this is a time for extreme courage!” Trump wrote.

Later, at the rally of his supporters where he railed against “weak Republicans” and complained about “explosions of bullsh*t,” Trump continued pressing Pence, describing a recent conversation with his vice president.

“I just spoke to Mike. I said, ‘Mike, that doesn’t take courage. What takes courage is to do nothing,’ ” he said.

Senate Majority Leader Mitch McConnell in his opening remarks during the Senate debate on Arizona’s electoral results said that his vote today would be the “most important he ever cast.”

“This will be the most important vote I’ve ever cast. President Trump claims the election was stolen. The assertions range from specific local allegations to constitutional arguments to sweeping conspiracy theories,” he said.