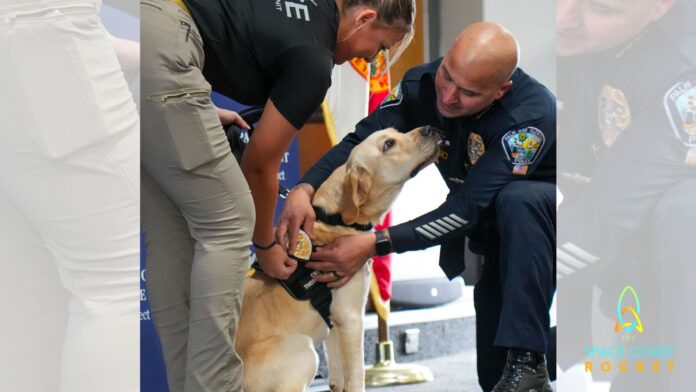 Toby and his handler, Officer Kurval, will be providing services to our community and members of our organization as part of our Community Resource Unit.

Toby officially took his oath-of-office this morning, putting paw to paper for an indefinite amount of dog years.

There wasn’t a dry eye in the house after Toby’s speech.

“After I so easily learned to sit and lay-down, I just knew there was more in store for me. It wasn’t about the treats I was getting, no. The real treat was the joy I saw in my handler’s eyes after what we accomplished through teamwork. I knew I was ready to serve on a larger scale.”

Toby says he thought about all of his brother and sisters coming up in the pound that took the wrong road.

“I heard my brother Coojoe went to a family and was soon charged with grand-theft and felony vandalism after destroying $3,000 Louis Vuitton shoes. He spent 5 days in the doghouse, and I ain’t about that life.”

We asked Toby how it felt to be the first yellow lab therapy dog.

“It’s not about fur color,” he said. “Yellow labs, chocolate, black, and even those weird labradoodles that hop around like untrained idiots, we all just wanna provide happiness to those around us.”

Toby said one of his first acts will be to go down to the shelter and speak to troubled animals. “I just feel like if they see me as a success story, someone they can relate to that used to share the same pee-pads as them, they can be motivated to turn their lives around.”

Toby thanked his sponsor Dunkin’ Donuts and made a promise to be a “good boy” to everyone.

The day wasn’t without controversy though. Toby went against department policy and declined a body-cam.

“Listen, they way that I greet other dogs in the street isn’t something that needs to be recorded. It’s a private and personal thing, sniffing butts. Some people may have trouble understanding, but its our culture. It’s how I know where you been, and what kinda “crap” you been getting into.”

Chief Augello said that he wasn’t sure if that type of body-cam footage would be exempt from public records laws, but may be something to bring up in the next legislative session.