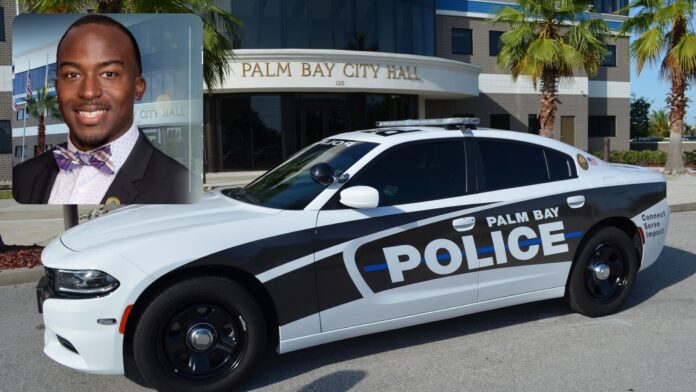 On October 15, 2020, Deputy Mayor Kenny Johnson informed the rest of the City Council that he would be seeking to put on an upcoming agenda, a proposal to give raises to the Palm Bay Police force.

Deputy Mayor Johnson stated he felt confident in the success of the much deserved proposal saying, “I feel like that a vote against this pay raise would be like voting to defund the police.”

This Thursday at the first regular scheduled City Council meeting since the election, the item will be addressed under New Business #4 for consideration of the entire Council, and to be voted on.

This will be the first regular council meeting for the newly elected Mayor Rob Medina, as well as Councilmen Felix and Foster. Deputy Mayor Johnson was unanimously re-elected as Deputy Mayor for the 2nd consecutive year.

Councilman Foster is a retired law enforcement officer himself, and Medina expressed his support for more financial support of law enforcement during his campaign. A total of 3 out of the 5 available votes are needed to pass the item.

Acting City Manager Suzzanne Sherman said in a memorandum to the Council:

Over the past year, the Palm Bay Police Department has experienced an increase in turnover for both Sworn Police Officers as well as Telecommunicators. With nearly two (2) dozen vacancies for Police Officers and eight (8) for Telecommunicators, to include five (5) positions frozen for FY21, the remaining Police personnel are shouldering growing workloads while the Training/Recruiting Department faces the challenge of hiring high quality candidates to serve the citizens of Palm Bay. One of the primary reasons for recent turnovers is due in part to salary in comparison to opportunities at other law enforcement agencies. Over the last year, 12 sworn police officers have left for higher paying positions at other agencies. Additionally, the Communications Center has lost several Telecommunicators to other departments within the City of Palm Bay for higher pay as well as more stable work schedules.

In March of 2020, Human Resources provided a salary/benefit comparison for the Telecommunicators in relation to other Brevard County agencies. In May of 2020, a similar pay study was conducted by the Police Department to identify where the current salary ranges for Police Officers, Police Sergeants, Police Lieutenants, Police Commanders, and Police Deputy Chief are ranked among other Brevard County and similar sized agencies within the region. Since that time, additional increases for Cocoa Police Department, West Melbourne Police Department, and the Brevard County Sheriff’s Office were updated. Both the civilian and sworn pay studies identified a disparity between Palm Bay and the other county agencies with Palm Bay’s ranking near or at the bottom of each position for salary ranges.

In order to continue to employ skilled, qualified personnel in each of these positions, the Police Department requests to provide the following pay adjustments:

As the largest municipal law enforcement agency in Brevard County serving a population of over 119,000 residents, the Palm Bay Police Department must address its current staffing shortages while focusing on retention and recruitment. The proposed pay adjustments for Sworn Personnel as well as Telecommunicators will address the primary challenge to staffing, salary disparity, while allowing the Palm Bay Police Department to connect, serve, and impact the citizens of Palm Bay to its fullest potential.

FISCAL IMPACT:
Based upon an effective date of December 5, 2020, the projected fiscal impact for the remainder of FY21 is $478,350 to be funded from state shared revenue to be reflected in the FY21 Budget through the first Budget Amendment of the fiscal year. Of the additional $1,472,760 in additional revenue to be recorded, $525,673 was previously appropriated by City Council at the November 5, 2020 Regular Council meeting; the remaining balance is currently unallocated. Please see Attachment A for detailed General Ledger Account budget appropriations.