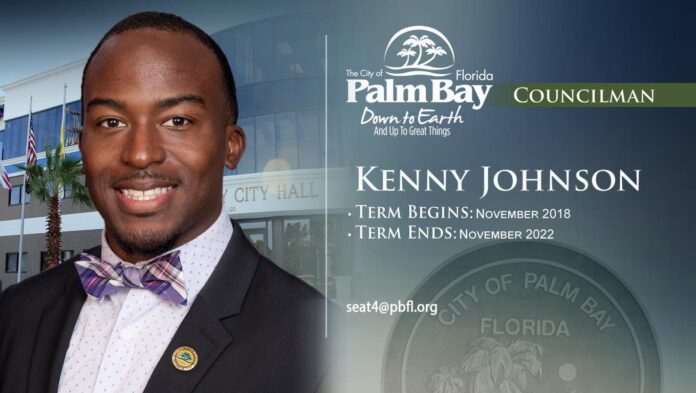 Last night at Palm Bay’s City Council meeting, Deputy Mayor Kenny Johnson made a motion revise the agenda, removing the item that would change the ordinance, allowing the council to appoint a temporary member to the vacant seat left by Jeff Bailey.

The move drew a large round of applause and cheers from the audience in attendance, and overwhelming support from those watching online.

Councilman Bailey who was attending the meeting by phone, due to being stuck in traffic however, didn’t want to remove the item. Bailey still wanted to change the existing ordinance, wanting to change the timeline for the special election, stating he thinks it would save the city money because of the timeline of his voluntary resignation. Had Bailey resigned at the last meeting, it would have had the same effect, saving the city money, however he wanted to attend one more meeting which pushed the special election date past the already scheduled general election in November. After much discussion, Mayor Medina stated that Bailey was starting to muddy the waters, and agreed with Johnson that the best thing to do would be to just remove the item all together. Medina seconded Johnson’s motion.

The original proposal brought forward by the city staff called for the removal of a special election, which would cost the tax payers $253,000, and simply appoint someone to the vacancy being left by Councilman Bailey for the remainder of his term, which is just over one year. This proposal caused hundreds of residents and nonresidents to show up to the following meeting to protest against this change. 100% of the public speakers stated they wanted to have the special election to fill the seat, regardless of the cost.

Deputy Mayor Johnson agreed. He suggested the proposal then be changed back to what the City Charter stated before it was changed to give council the authority to fill the seat how they see fit. The language in the City Charter stated there would be a special election, and a temporary appointment to fill the vacancy until the special election could occur so that there would be a full 5 member council, and a remaining tie breaking vote.

That proposal was passed and scheduled to be voted on for the final time at last nights meeting. Deputy Mayor Johnson stated that he decided to withdraw the item all-together. He stated that at the last meeting, he felt he found a good compromise between to the two positions. However, from the feedback he received from the people, they stated they felt like the council could operate with only 4 members until the special election could occur. He also pointed out that all 4 remaining council members agreed at the budget workshop to remain within the 3% cap. That move also drew cheers from the crowd, taking the wind out of the sails of those who claimed that the council was trying to appoint a member to have a super majority vote to exceed the 3% cap.

Johnson stated that he believes there will still be challenges until the special election, but he’s there to listen to the people, and this is what the people wanted overwhelmingly.

Councilman Donny Felix stated that he was very disheartened by the comments made by residents on social media, and also by the Mayor himself, calling names to the other 3 council members before a vote was even cast, and there was nothing more than just a discussion of the options. Felix stated he is there to serve, based on his faith and values, and asked for respect from the people he was elected to serve.

Councilman Randy Foster, who made the original motion to only appoint to the vacancy and not have a special election, pointed out that as of yet, not a single person has actually filed to run for Bailey’s seat for the upcoming election in 2022. Foster said he made the oringal motion to simply appoint to the vacancy for that reason, and to save the quarter of a million dollars cost of a special election to fill a seat for less than a year. He went on to make the point that the other cities within the county do the same thing in filling their vacancies. He also made the point that the Governor of Florida also makes appointments, so to call making appointments un-American, is to call Governor Desantis un-American.

Foster went on to say that he agrees with the people, that there should be a special election, and that it needs to reflected as such in the City’s Charter. He recommended that that’s what be put on the ballot for the people to decide how vacancies should be filled in the future, instead of the council themselves, which is currently what the charter allows.

Johnson’s motion to withdraw the item was passed. As a result, there will be a special election to fill the vacancy. According to the Supervisor of Election’s office, the election will not take place until after the new year. This will leave Bailey’s seat vacant from August 10, 2021 to at least mid January but no later than mid February, effectively 5-6 months. That would leave 10 months remaining on the term.

Whoever does run for and wins that special election will also be losing 3 years from the term limits of a council-member. Under Florida Law, a partial term still counts as a full term.