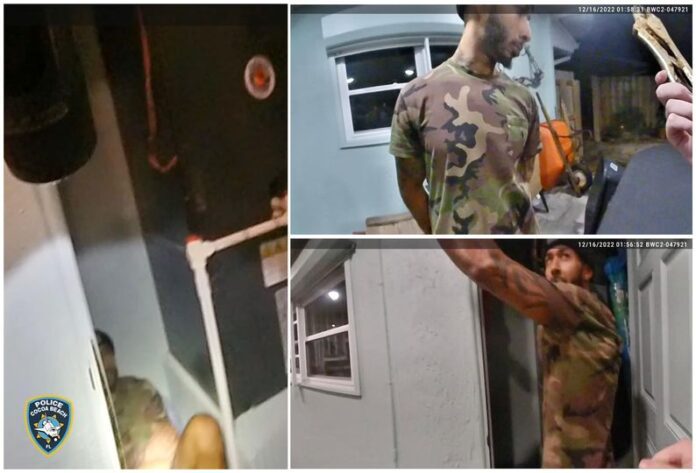 Ian Maldonado, 30, of New Hampshire, was arrested early Friday morning, December 16, at about 2:00 A.M. when he was found hiding in an outdoor utility closet of a residence on Bali Rd. by Cocoa Beach Police.

Hours prior, officers responded to the Cocoa Isles neighborhood regarding a vehicle that struck a stop sign and fled down Bali Rd. The driver abandoned his vehicle and was believed to be in the area on foot. Officers searched for some time, along with assistance of BCSO’s Aviation Unit, to no avail. The vehicle was subsequently towed.

Shortly before 2:00 A.M., a homeowner on Bali Rd. called Cocoa Beach Police to report noises coming from the backyard of the residence. Officer Bobby Strange responded, checked the perimeter, and found Maldonado in an unlocked utility closet that was attached to the home.

Further investigation determined Maldonado was allegedly involved in the earlier crash, fled, and was hiding in the closet to stay warm until he could leave the area.

Maldonado was taken into custody without incident, charged with Burglary to an Occupied Dwelling and Giving a False Name to Law Enforcement, then transported to the county jail.