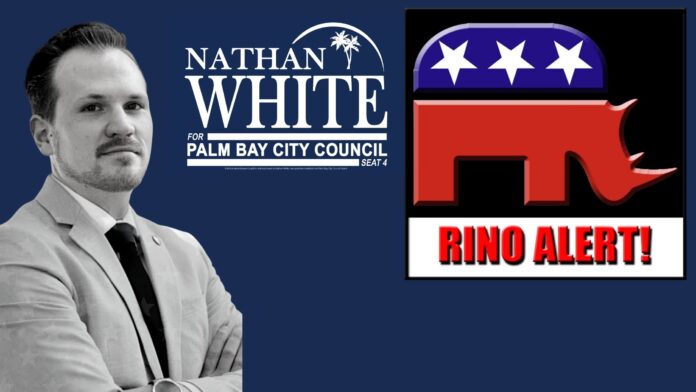 In the flyer that White, who is a registered Republican, is hading out to voters, states in his disclaimer that he is a “non-partisan candidate” meaning not affiliated with any party. No such language is permitted under Florida Campaign Finance law. In partisan races, the candidate must disclose their political party in the disclaimer for their advertisements. When there’s a non-partisan race, that portion of the disclaimer where party affiliation would normally go, must remain absent. Ironically, these illegal disclaimers are under his “restore trust” slogan.

The statute is very clear and states this:

Variations are prohibited by law.

Candidates running for non-partisan office may not state the candidate’s political party
affiliation in the disclaimer, or in the body of the advertisement. Exception: The candidate
is not prohibited from stating the candidate’s partisan-related experience.
(Sections 106.143(3) and (5), Fla. Stat.)
Note: A candidate running for an office that has a district, group, or seat number does not
have to indicate the district, group, or seat number in the political advertisement or
disclaimer.

An example of the correct disclaimer is below on his opponent’s campaign sign which you will notice, Nathan White copied everything from the color to the logo, except for what he’s actually legally required to get right; the disclaimer. It appears as an illegal attempt to sway Democrats and NPA’s/Independents to vote for him, disguising the fact that he is a Republican.

However, not only is the illegal disclaimer on his flyers, it’s also on his campaign signs themselves. We went to check his website for its disclaimer, but it has since been taking down.

Every single one of these violations is a first degree misdemeanor and comes with a $1,000 fine for each violation.

Any person who fails to include the disclaimer in any electioneering communication that is
required to contain such disclaimer commits a misdemeanor of the first degree, punishable
as provided in Section 775.082 or 775.083, Florida Statutes.