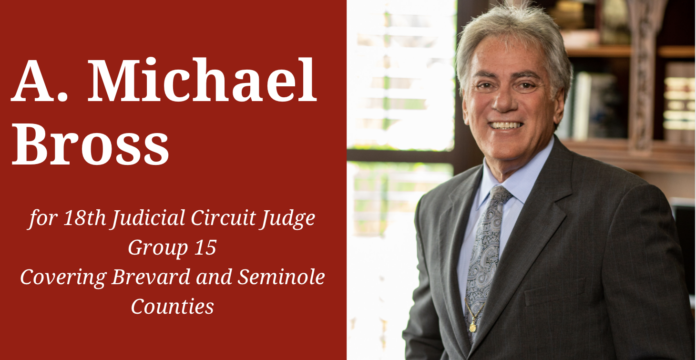 Michael “Mike” Bross is running for judge in the 18th Judicial Circuit and has been a Brevard and Seminole County attorney for 34 years, both in the civil and criminal arenas.

His knowledge of the law, his sense of fair play and his concern for all the communities in the 18th Circuit and their residents make him a strong candidate to take a seat on the Circuit Court Bench this year.

Through his many years of practicing law before countless judges and in many jurisdictions, Mike Bross has developed an understanding of the legal system, the Florida Statutes, practices and procedures, case law, and court administration that far exceeds the incumbent’s grasp.

Bross began his legal career practicing personal injury, worker’s compensation, landlord/tenant disputes and family law under the tutelage of his father, former Brevard County Solicitor Jerrold Aaron Bross. He has continued to represent clients in need of his bold and remarkable courtroom style in the civil courts to this day.

As a criminal defense attorney, Bross has represented literally thousands of defendants charged with everything from traffic tickets to first-degree murder.

He has vigorously advocated for each and every defendant, in courtrooms across the State and in Federal Court, and has a tremendous track record of favorable resolutions and jury verdicts.

Bross believes that there are people who are “career criminals” and who represent true dangers to our society – those people for whom rehabilitation is not an option, it’s an impossibility.

He has refused to defend such criminals, and he will not shy away from appropriate, long-term incarceration in such cases and, if warranted, the death penalty.

Bross graduated from Titusville High School in 1973 and immediately enlisted for active duty in the United States Army. After his initial three-year stint as a Military Intelligence Analyst, he continued his service to our country by enlisting and then re-enlisting in the Ready Reserves.

During his second enlistment with the U.S. Army Ready Reserves, Bross was accepted by Campbell University School of Law. In 1984, he was Honorably Discharged by the Army and was able to devote his full attention to attaining the degree of Juris Doctor in 1985

=Bross has been described as “the embodiment of integrity” and a “person of substance” by many. In 2018, he received both a Space Coast Public Service “Making a Difference” Award and recognition as a Central Florida Space Coast Humanitarian for his work and support of safe, clean and affordable housing for men and women in recovery from drug and alcohol addiction.

As an attorney, he has witnessed how drug addiction affects broad sectors of our communities, often leading to crimes of theft and violence, even murder.

He has seen parents bury their children, and children bury their parents, all because of drug addiction. Not only does  Bross advocate for rehabilitation, he and his wife of 44 years, Sheri, personally funded the program.

Bross has provided sponsorship funds for various youth sporting teams through the years. He and his wife, while raising their son and two daughters, actively participated in coaching girls’ softball and now delight in attending their seven grandchildren’s sporting events and talent recitals. The Bross family has also supported several Christmas toy runs.