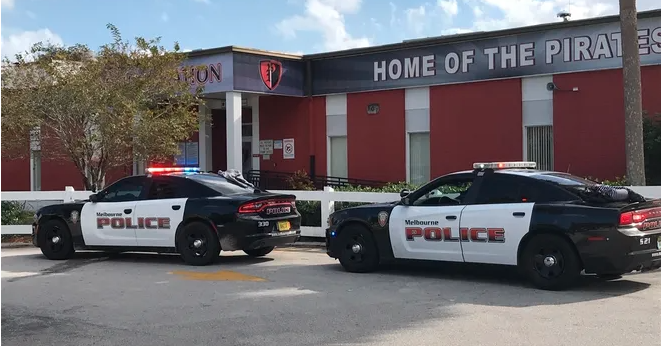 At the end of the football game last Friday at Palm Bay High, a police officer was told by bystanders about a group of males in ski masks in the parking lot. As the officer and a detective approached, they drove off to a red Hyundai sedan.

When he ordered the person in the front passenger seat to roll down the window, police said Johnson, the driver hit the gas and knocked the officer to the ground almost running him over according to reports.

The officer said he ran to the vehicle and, seeing that the passenger had a firearm out, drew his own gun. Investigators said Johnson again refused orders to stop the car and reversed into two vehicles.

After the occupants of the vehicle ran off, a police dog tracked down Johnson who then surrendered.

Johnson faces charges of aggravated battery with a vehicle on law enforcement, aggravated fleeing and eluding, disrupting a school function, leaving the scene of an accident with property damage and driving without a license issued.