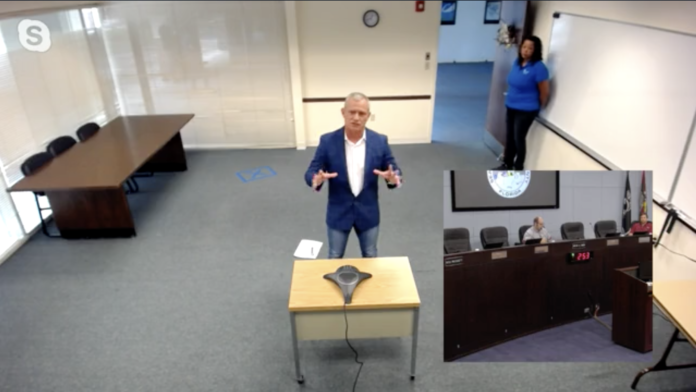 In a very unusual County Commission meeting this morning, Melbourne City Councilman Tim Thomas was the only speaker that showed up for public comments. He started off with many compliments and congratulations to the County Commission on a job well done for the handling of the pandemic.

He specifically thanked them for their leadership. The comments on the live Facebook feed exploded in disbelief. This commission meeting in particular started with about a 10 minute tirade from Chair Bryan Lober over his displeasure of an email between another Commissioner who he refused to name and a constituent. He chastised the unnamed Commissioner and threatened to email their constituents himself in the future.

Lober then went on to talk about a FedEx package he received from Hooters that he thought was a calendar.

District 3 Commissioner John Tobia was not pleased and reminded Commissioner Lober of the comments he has made to many citizens that he characterized as abhorrent and disgusting. Lober interrupted him several times during his comments, and then went on another tirade immediately following denying and attacking.

When pressed again by Lober, Tobia brought up one particular incident that made national headlines when Lober told a private citizen that she should abort her future children amongst other things. Lober struck back and implied that Tobia was ok with racism and sexism. Again, the Facebook live comments form the hundreds watching were dumbfounded of Lober’s behavior.

After over an half an hour of this what could be classified as a tantrum, Councilman Thomas began his compliments of their leadership. He spent so much time singing their praises that he ran out his allotted 3 minute time allowed for comments. Commissioner Lober promptly asked for a motion to allow him to have another 3 minutes to comment. Never in his time as the Chair has he asked for someone to be given additional time in public comments. Thomas continued and even exceeded his next 3 minutes.

Thomas then went on to comment as his position of a Melbourne City Councilman and bragged about leaving open parks and boat ramps in Melbourne so that people can get out of the house. To date, Melbourne by far has more positive cases than every other municipality in the County at 28. Melbourne has a population of about 76k residents. Palm Bay, the largest city in the county by far at 117k residents has 16 and all other municipalities are in the single digits.

The comments from residents again exploded in disbelief with some making the suggestion that allowing him to continue to speak is literally going to kill people. The allege that leadership approaches like his directly contribute to the outbreak happening in Melbourne far above any other city in the County.