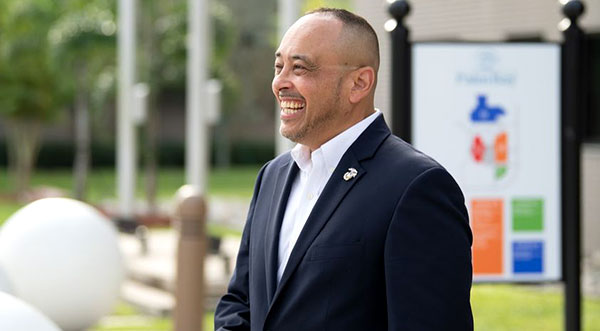 WARNING: This article will contain some very strong, personal words.

As we broke the story initially reporting Mayor Rob Medina awarding an American Flag flown over Palm Bay’s City Hall to a war criminal who was convicted and confessed to premeditated murder and conspiracy to commit premeditated murder; Medina is defending his actions.

In an interview with Florida Today, Medina said “It wasn’t a homicide, in a sense. It was soldier doing what he was trained to do.”

Except that isn’t remotely true. It is exactly the opposite of what we (Soldiers) are trained to do. There is no military training whatsoever that instructs any Soldier to blindfold and hog-tie detainees we suspect may have been involved in a previous attack, shoot them in the back of the head, and throw them into a ditch.

To be clear, these detainees were not identified and captured immediately after a fire fight the convicted war criminals were engaged in. After the fire fight, in another part of the town, a man was seen running into a house. The platoon followed the man into the house and found others inside, along with weapons which they were legally allowed to have. Even though the men denied being involved in the previous fight, the platoon detained them, suspecting them of being involved somehow.

According to testimony, the First Sergeant in charge at the time, Hatley, (who was sentenced to life in prison for the crimes) decided that there was enough evidence to keep the detainees in prison if they turned them over to the holding facility. Mayo and Hatley made the decision to “take care of them” on their own instead, and attempted to coerce other Soldiers in the platoon to participate in the murders. Two others did, killing at least four detainees.

“Me honoring him was a healing moment for him, I believe, and I believe doing right by him was accomplished,” Medina said. Except it was just him honoring him; he did it on behalf of the largest city in Brevard County.

“He still served our nation, and in serving our nation we train our soldiers, infantry men in particular, to kill the enemy. That’s exactly what occurred.” But that’s not what occurred. According to a military court, and the criminals themselves, they committed premeditated murder of detainees they only suspected of being in a fire fight with them previously. They took it upon themselves to be judge, jury, and executioner. They knew and admitted that what they were doing was illegal and considered murder.

Medina, who served about 3 years in the Marines as a finance clerk has never been to combat, and with such a short career has very little personal experience in the military to fully understand these circumstances or make such judgement calls on this illegal and disgraceful behavior.

Most would argue the Joseph Mayo having his sentence reduced from 35 years to 20 years and receiving parole is far more healing than deserved. A civilian facing such charges would be looking at the death penalty in Florida. Upon completion of his sentence, Mayo’s dishonorable discharge will be upgraded to a bad conduct discharge, also showing leniency.

Palm Bay recently instituted a program to honor Veterans and first responders with flags, but the program was so new that no official policy had yet been written. However, Joseph Mayo is no longer considered a veteran according the US Code after receiving a dishonorable discharge. Although Mayor Medina still refers to him by his former rank of Sergeant First Class which was also stripped of him. It is completely disrespectful and abhorrent to disgrace not only the American Flag in this manner, but also anyone else who shares that rank which of a Senior Enlisted Non-commissioned Officer, which is so difficult to attain. It is part of the reason Mayo was stripped of it. Medina disrespectfully and without authority awards it back to him. While in prison and on parole, military criminals are still technically on active duty until the completion of their sentence. As far as the Army is concerned, Mayo is a Private. Medina seems to think he has more authority than the United States Army to assign Mayo the rank of his choosing.

In addition to being the Mayor of Palm Bay, Medina also serves as the Military Affairs representative for Congressman Bill Posey. It is quite alarming that an individual representing the United States Congress would behave in such a disgraceful manner so publicly and in an official capacity. The consequences of such actions can be proven deadly and Medina single-handedly has placed the entire City of Palm Bay at risk, as well as our Service-members serving overseas in hostile environments.

Consider had the roles been reversed; if 4 American Soldiers were captured by the enemy suspected of engaging in a prior fight with almost zero evidence to support the allegations, and the enemy executed those American Soldiers and kicked their bodies into a ditch, what the response would be from the United States. It would be strong and severe violence. Now, consider that the government of that nation took the Soldiers who committed that crime, and honored them publicly, calling their actions heroic, and awarding them the nations flag on their nations most patriotic holiday. It would be a slap in the face to law and order, putting our allies, current prisoners of war, deployed troops everywhere, and civilians in danger of the same response.

Soldiers who have seen actual combat and have endured attacks by opposing forces understand the feelings that these individuals had. However, every Soldier is trained on the rules of engagement, and the international laws of the Geneva Convention. I as a Combat Medic who fought in these same areas have had to actually treat the same wounded combatants who just tried to kill us minutes before. I had to save the lives of those who just tried to take ours. I was legally and ethically bound to do so. I didn’t like it, no one does, but it is our duty.

Mayor Rob Medina has single-handedly, knowingly, and purposefully done just that for his own selfish and personal reasons. He has taken it upon himself to honor someone who the military itself has decided is DISHONORABLE. Mayor Medina intentionally mislead the citizens of Palm Bay into celebrating and honoring a convicted war criminal, lying by omission of this former Soldier’s horrific actions. We present flags to the surviving family of those killed in combat and who have served our nation honorably. Medina has presented the same to a convicted war criminal.

I didn’t think it could get any worse until he made his comments today, doubling down and defending his actions. His words today show great discredit upon himself, the City of Palm Bay, Congressman Posey’s office, the state of Florida, the United States, and the United States Military men and women who serve honorably all over the world today. This act alone could serve as a recruitment tool for radicals and terrorist organizations.

Under no circumstances should Medina be allowed the continued privilege to serve in the United States Congress, or representing the city of Palm Bay as the Mayor as a result of his actions, and the defense of them. He has shown a complete ignorance and disregard of the traditions and laws the United States prides itself upon in being an example to the rest of the world.

Joseph Mayo should have never accepted the flag to begin with, but at a minimum should return it in order to attempt to repair the actions that have occurred. What Veteran or first responder would now want to be presented with a flag from the city now that Medina has set the bar so low? It is against the law for a military prisoner to even render a salute to an Officer because of the level of disrespect it would be towards that Officer who would be obligated to return the salute. The Palm Bay Mayor found it fitting and respectful to give the same person an American Flag ceremoniously to honor him. Medina should offer his resignation and an apology to the city immediately, because as far as this Veteran and many others are concerned, he has lost all faith and confidence in his ability to execute the duties of that office.

It is so often that sometimes the loudest Veterans, the most “hoorah” who talk the most, have done the least. Medina has now managed to do the most, in the most atrocious way.

It is absolutely disgusting. Many Veterans will be showing up at tomorrows City Council meeting to share their feelings with him directly.

A very detailed account of the murders can be seen here.