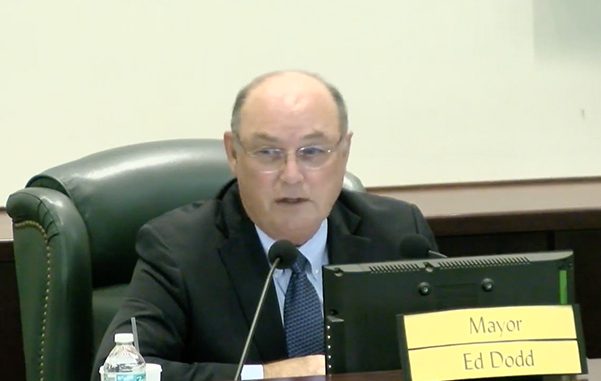 Damien Gilliams, Pamela Parris, and Charles Mauti attended the Natural Resources Board on Tuesday night. Conducting business without the rest of the council members is a violation under the Sunshine Law.

However, Charles Mauti left the room before Damien Gilliams approached the board to speak. So, Mauti may be cleared of any wrongdoing. Right now, based on the information, Mauti didn’t violate the Sunshine Law.

“I have asked the city attorney to give me a recommendation about the meeting and will introduce this information at the next meeting,” Dodd told Sebastian Daily.

“It is very serious,” Dodd added.

During the meeting, Gilliams went before the board, asking the volunteers to make a decision. In the background, Parris can be seen sitting, Mauti was in the room, but not seen on camera.

Dodd said someone filed a complaint after watching the meeting live on Tuesday.

The city council meeting Wednesday was a travesty and an embarrassment to the residents of Sebastian. Gilliams disrupted the meeting more than a dozen times, challenging not only Mayor Dodd but a City Attorney as well. Gilliams can be seen arguing for almost 30 minutes during each issue brought forward before he agreed and moved on to the next one.

Towards the end of the meeting, Dodd brought up the topic of breaking the Sunshine Law to Gilliams.

Super Secret Listening Session Scheduled for Friday – State Official will tiptoe in then run out.