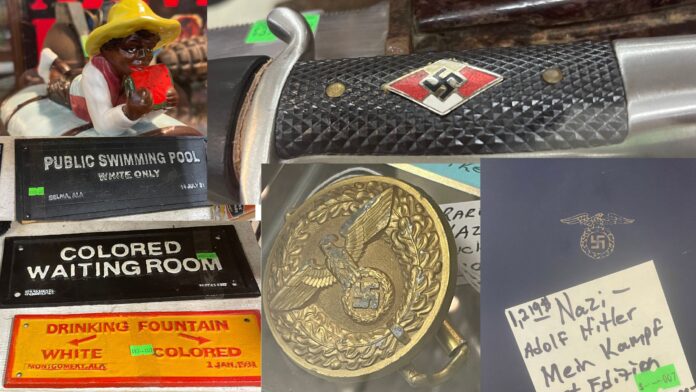 They operate an entire side-aisle of the highly trafficked flea market, with thousands of items on display for sale.

Many items on display have raised some concern. Throughout the store, signs that designate pools, restrooms, and drinking fountains for “whites” and “colored” can be found. There’s a “colored waiting room” sign, a “white only” public swimming pool sign, and others, all for sale for hundreds of dollars. Many of the racist items were on the same shelves as unrelated modern toys for children.

Also on display were glass figurines of blackface clowns, and various KKK items, including a KKK Grand Wizard belt buckle.

But the knickknacks weren’t limited to just American racism, but also Nazi Germany items and other symbols of hate were available for profit.

According to their website, under Rules and Regulations, 14(d) banned items, “Offensive books or other material” are prohibited. When we called the office to inquire if complaints or issues have arose from this store before, we were told that yes people have complained, but it’s been a while. We were told to direct any other questions to the owner, Cindy Renninger via email.

We spent quite some time observing patrons who were walking around to store and noted their reactions when they came across the items. One man walking with his family when he came across the white only swimming pool sign gasped and said, “oh no…that’s…..wow.”

An elderly couple when they came up to the display case with some of the most notable Nazi items were more explicit. “What the f_ck?!”

It should be noted that the items are not centrally located in one area, but in many areas and shelves throughout the store.

We asked a few people their thoughts after seeing them for themselves. The reactions were mixed.

“It’s absolutely ridiculous that we have people in our community here profiting from racism and hate, but I guess they feel like they are in the right place to do just that.”

“ I would honestly buy that stuff, and either make a wall of evil to never forget, or donate it to a local museum for them to create the wall of evil. I would also buy all of it just to make sure a hateful, racist doesn’t get to buy it and revel in it.”

“I guess it is our history, but I don’t want to be reminded of it right in my face.”

That reaction stood out because it is in line with some of the recent legislation passed here in Florida under Governor DeSantis’ “Stop WOKE Act” which has been deemed unconstitutional in the federal courts. (DeSantis has appealed the decision)

The bill prohibits instruction that suggests that individuals should feel “guilt, anguish, or other forms of psychological distress because of actions … committed in the past by other members of the same race.”

The bill also bans schools and workplaces from teaching that anyone is “inherently racist, sexist, or oppressive, whether consciously or unconsciously,” or “privileged or oppressed … determined by his or her race, color, sex, or national origin.”

Books in the school system that depict the same historical images as seen in this store, have been removed or replaced in order to comply with recent demands and Florida law.

Antisemitism has been on the rise in Florida, around the nation. Florida has seen a dramatic rise in anti-Semitic incidents, according to the Anti-Defamation League—a 50 percent increase from 2020 to 2021.

The latest FBI data on hate crimes is from 2020 and it shows about 55% of religiously motivated hate crimes were committed against the Jewish community. In Florida, it was 80%, with 16 anti-Jewish crimes reported.

Hate groups have been posting signs up above bridges over highways in Brevard and Duval counties recently, as well as flyers found in people’s driveways in Brevard.

It is clear from recent actions and statements made publicly, that racism, hate, and antisemitism are not just a part of our shameful history, but more history in the making.