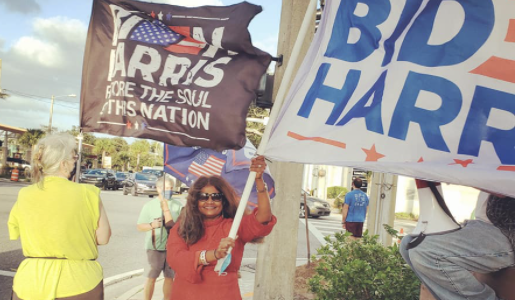 Lober who has been at odds with Sheriff Ivey as of late stated in an interview with Florida Today, “I have nothing against either of them,” Lober said. “It never occurred to me that this would be something to be politicized.”

Edmond, a Democrat, ran against Sheriff Ivey in this years election. Ivey won that race with 66% of the vote.

Lober also stated in the interview, “I don’t want this to be a political issue,” Lober said, adding that, in his view, “the extreme right and the extreme left” have made it one on social media.

“I didn’t think anyone would make this such a polarizing an issue, at the end of the day,” Lober said, blaming his own “political naivete” after having served only two years in public officer.

Even though it was completely Lober’s choice to nominate Alton, and then in turn withdraw the application, Lober told Dave Berman of Florida Today “I do actually feel bad for Alton,” Lober said. “It’s an unfortunate situation.”

But the situation is completely his doing. Blaming it on his inexperience as a politician doesn’t past muster for most Republicans. Lober only became a Republican himself in just enough time to qualify to run as one for his election in 2018. Since being elected, he has been criticized often by the party for numerous actions that do not line up with its fundamental values.

Now to replace Edmond, he has nominated Democrat Seeta Begui. Seeta also ran unsuccessfully for office in 2018 against State Representative Thad Altman, and to be a delegate for the Democratic National Convention.

Seeta works as a nurse, an author, and also hosts a talk radio show. She says she is a very active member of the Democratic Party and is very vocal on the issues she believes in. She is one of the few people that Lober seems to get along with on social media, and he has recently agreed to join her on her radio show.

She is a very strong advocate for Joe Biden and protested against Trump regularly.

The nomination by Lober comes as a surprise as he frequently points out his loyalties and responsibilities to his constituents in his own district. Seeta does not live in his district as Edmond did. Some have even questioned whether or not she should accept the nomination as it seems that he is pandering. Edmond is undoubtedly far more qualified for the position on paper which begs the question of why he would seek an even further left candidate outside of his district with less experience.

Nevertheless, Seeta is excited about the opportunity. She stated in a facebook post tongiht, “helping our community is my goal has always been…what took them so long to ask me? Will do my best….lord knows I have been involved….”

It will be up to the County Commission to decide whether or not she will serve, or whether Lober will go 0 for 2.

Lober is the only Commissioner who will be up for reelection in 2022, and he appears to be strongly courting the left.