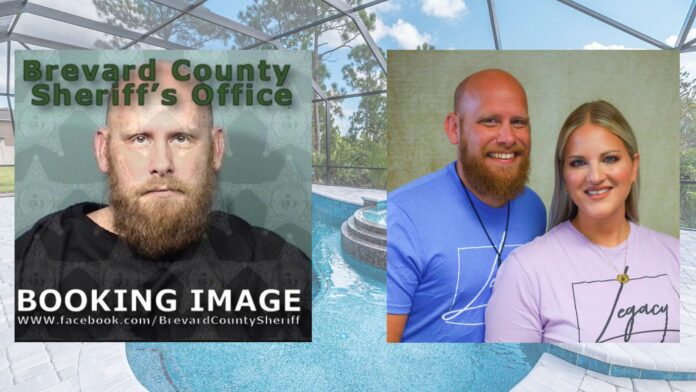 Official court documents show that Legacy Pools owner Charles “Chad” Black was arrested in Brevard County for an out of county warrant on the charges of Grand Theft, and Fraud Scheme to Defraud in Osceola County.

Charles and his wife Kristin Black, both West Melbourne residents, have been the subject of years of complaints of unfinished pools. Homeowners have complained of Legacy taking deposits of tens of thousands of dollars, and often never completing the work. They have an F rating on the BBB website.

Records show that in April 2020, Legacy Pools received $127,470 in PPP loans for payroll. During that time, the couple posted numerous photos on vacation all over the world while customers were complaining of their pools going untouched for up to and over a year.

Several Facebook groups have been created with hundreds of members who feel they have been scammed by the company.

Recent court documents also show a default judgement against Kristin Black for a nearly $30,000 loan for concrete. As a result of the unpaid loan, a lien was put on the homeowner’s property that Legacy was doing the work for.

Another filing from 2019 appears to show a pattern of failing to pay large debts with the Legacy family.

Chad is still being held in Brevard County Jail according to records, awaiting extradition to Osceola County. It is not clear if there is a pending warrant for Kristin’s arrest.

They are one of just several pool companies whose owners have been arrested and sentenced for similar fraud charges.

Hillary Bello, owner of the now-shuttered Cox Pools of the Gulf Coast, was taken into custody by the Manatee County Sheriff’s Office on Wednesday.

According to Florida Attorney General Ashley Moody, Amore’ Pools Inc. owner Brian Washburn defrauded Florida homeowners out of nearly $3 million, often leaving dangerous debris piles and gaping holes in victims’ backyards instead of performing the promised work. He defrauded more than 150 Floridians who made upfront payments to have pools built on their properties.

“The defendant took their money but failed to do the work—often leaving victims with large holes in their backyards. Law enforcement uncovered this multimillion-dollar scheme, and now my Office of Statewide Prosecution has secured multiple felony convictions related to this massive fraud,” said Attorney General Moody.

This is a developing story and will be updated.