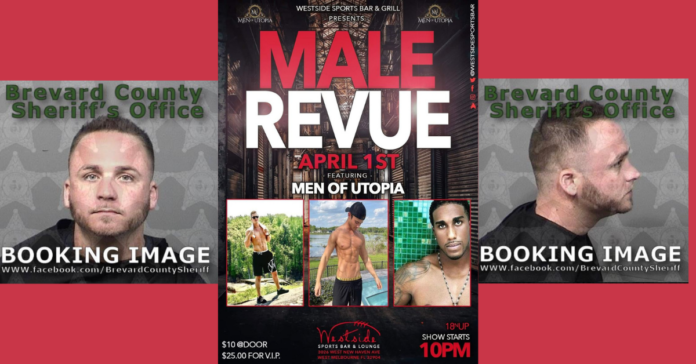 Video surveillance from the undercover officers inside capture numerous sex acts and other violations occurring during the “male review” event scheduled that night according to the arrest affidavit.

Kirby was arrested afterwards and admitted to knowing it was wrong and being warned before hand by law enforcement. He was arrested for having several previous failure to appear notices and is still in custody with only a $250 bond. He has an extensive arrest history within Brevard County. His priors include but aren’t limited to, grand theft, forgery, fraud, battery, aggravated battery, dealing in stolen property, carrying a concealed weapon without a license, selling drugs, stalking, leaving the scene of an accident, driving while license suspended with knowledge, and contempt of court for failing to serve farm time.

Kirby became well known during the pandemic making statewide headlines for having a policy of not allowing any patrons into his establishment if they wanted to wear a mask; effectively banning masks from the bar during the height of the outbreak.

Just a few days ago his establishment posted on facebook shaming businesses who required masks.

The arrest affidavit reads as follows:

On 04/01/21 utilizing the Special Investigations Unit (SIU), a detail was organized to observe the male review
scheduled for 04/01/21 at Westside Sports bar at 3026 W New Haven Ave. Chapter 6 from the West Melbourne
| Code of Ordinances; specifically governing the “Adult Entertainment Code.” The Ordinance described activity
which would deem the place as an Adult Entertainment Establishment. Some of these include: “offers, solicits, or
contracts to dance or perform with a customer and accepts any consideration, tip, remuneration, or compensation from or on behalf of that customer,” “dances or performs within three feet of a customer and accepts any consideration, tip, remuneration from or on behalf of that customer.” There are many restrictions on the activity and behavior which can take place during one of these events. Sec. 6-9 states “It shall be unlawful for any licensee, operator, worker, or customer to violate any section or provision of this chapter. Any such person in violation of any section or provision of this chapter shall be guilty of a second degree misdemeanor and subject to punishment as provided in F.S. 775.082(4)(b) and 775.083(e). The first concern of violation was Sec. 6-42(a): “No adult entertainment establishment shall be permitted to operate without having been first granted an adult entertainment license by the city manager under this chapter This included using two undercover West Melbourne police officers. They were equipped with covert recording devices for the purposes of documenting any violations of City Ordinance or State Statute which they identified. Det Jenkins and Ofc Butler were dropped off at Wall Street Pub around 21:47 hours.

The officers remained in the establishment for approximately three hours. They left at 00:47 hours. During their
time inside, a security team was placed within proximity. I was positioned across from the front of the bar in the parking lot. While there I observed white male know from numerous police interactions as Gary Kirby owner/operator. During the incident he came out front several times to smoke.

I briefed the undercover officers. They observed owner/operators Gary Kirby inside the bar and in view of the
show while it was going on. They provide video and photographic evidence, which, in Substances shows the
following to occur: Throughout the detail there were numerous, blatant violations of Chapter 6. It was confirmed
the operators did not obtain a license for adult entertainment establishment. Whether currently licensed or not,
the activity which transpired on that evening would require them to obtain such licensing. (Sec. 6-121). Sec. 6-122
prohibits working at an establishment without a valid adult entertainment license. Sec. 6-124(a) it shall be
unlawful for any person to knowingly or within reason to know be an operator for an adult entertainment
establishment which does not satisfy all of the general requirements of all of the sections of this chapter Sec.
6-90(1) states whether licensed or not the establishment shall have a stage provided. A requirement for the stage
is the platform shall be located at least three feet from the nearest table, chair, area or other accommodation
where customers are seated or otherwise located. Sec. 6-90(3) mandates each establishment post a sign which is
clearly legible and located in a conspicuous place setting forth that straddle dancing is strictly prohibited. Sec.
6-127(b) specifies alcoholic beverages and nudity as prohibited. It shall be unlawful for any adult entertainment
establishment within the city boundaries, whether or not licensed under this chapter, to allow, permit, or offer
the on premises consumption, sale, or service of alcoholic beverages. Owner/operator responsibilities outlined in
Sec. 6-129 prohibit them from allowing workers to engage in prohibited acts. It shall be unlawful for an operator of an adult entertainment establishment, regardless of whether it is licensed under this chapter, to knowingly, or
with reason to know, aid, abet, encourage, permit, suffer, or allow any worker to: sub sec. Sec. 6-132 cites
advertising as prohibited activity. Sec. 6-134 prohibits allowing customers to engage in specified sexual activity.
The operators were found to be in violation of numerous requirements of Section 6. (1) engage in a straddle
dance with a person at the establishment, sub sec. (2) contract or otherwise agree with a person to engage in a
straddle dance with a person at the establishment, sub sec. (3) engage in any specified sexual activity at the
establishment, sub sec. (4) display or expose at the establishment any specified anatomical area less than
completely and opaquely covered, except that human male genitals in a discernibly turgid state, even if
completely and opaquely covered, may never be displayed or exposed, sub sec. (5) display or expose any
specified anatomical area while simulating any specified sexual activity, sub sec. (7) while engaged in the display
or exposure of any specified anatomical area, intentionally touch any person at the adult entertainment
establishment, sub sec. (8) intentionally touch the clothes or unclothed body of any person at the adult
entertainment establishment at any point below the waist and above the knee of the person, or intentionally
touch the clothed or unclothed breast of any female person, or sub sec. (9) engage in nudity at the establishment.

At the end of the detail Kirby was placed under arrest. He was transported the West Melbourne Police
Department. I conducted an interview with Kirby and advised him of his Miranda rights which he waived and
wished to speak to me. Kirby advised he knew it was wrong and he was advised of the ordnance by Lt Romano,
which is Lt Romano via email. He also advised he spoke to Sgt Jones today about the ordnance. He further stated
he has done three prior shows and almost canceled this one.