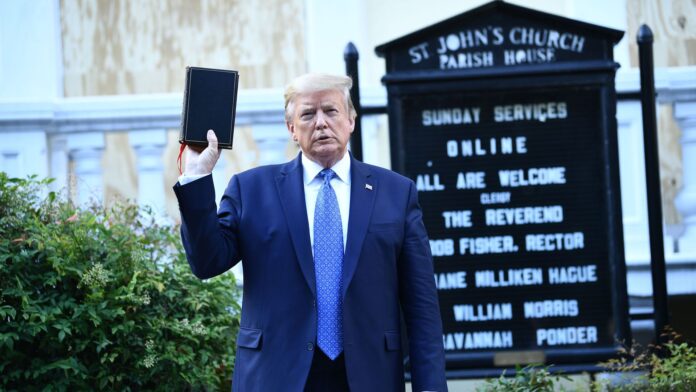 The US Park Police did not clear racial injustice protesters from Lafayette Park to allow for then-President Donald Trump‘s march to St. John’s Church last June, but instead did so to allow a contractor to install a fence safely around the White House, according to a new inspector general report.

The Park Police had the authority to clear protesters during last summer’s clash outside the White House, according to the report released by the Interior Department’s inspector general on Wednesday.

On June 1, 2020, law enforcement officers violently cleared Lafayette Square — a park near the White House. Protesters had been occupying the park for several days following the death of George Floyd in Minneapolis.

The officers, a mix of Secret Service, U.S. Park Police officers, National Guardsmen and other federal law enforcement officers, deployed pepper spray and smoke and flash grenades to clear the protesters out of the park.

Soon after the protesters were forced out, Trump walked across Lafayette Park amid the lingering scent of pepper spray and delivered a short speech while holding a Bible in front of St. John’s Church.

However, the report by Interior Department Inspector General Mark Greenblatt on Wednesday indicated that Park Police had already planned to clear the area and was already in the process of implementing that plan before they knew that Trump would be making an appearance.

“We determined that the evidence did not support a finding that the USPP cleared the park on June 1, 2020, so that then President Trump could enter the park,” the report reads.

While the report found the decision to clear protesters justified, it also found issues with the manner in which it was carried out.

According to NBC News, the report indicates that it’s likely that many protesters did not hear warnings from police before they moved in. The report also found that the Bureau of Prison’s decision to fire pepper balls into the crowd was “inconsistent” with the guidance issued by the USPP.

The Park Police were also surprised that D.C. Metro Police fired tear gas into the crowd while clearing the area.

Several groups, including Black Lives Matter D.C., filed lawsuits against Trump, Attorney General William Barr and other law enforcement agencies following the incident in Lafayette Square last June. The lawsuit alleged that protesters were not given enough time to clear the area before law enforcement began forcibly clearing the area.

In May, lawyers for the Department of Justice asked a judge to drop that lawsuit.