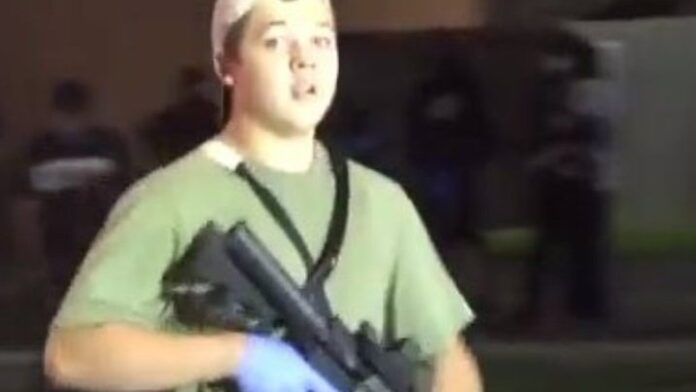 Cell phone video captures the shooting during a protest by a 17 year old male that resulted in killing 2 and injuring 1.

The shooting has been called an act of terrorism by many, however this most recent video shows that the shooter may have been acting in self defense.

The video captures the suspect fleeing from a group of protestors. What is not shown in this video however was the earlier shooting of a protestor in the head, and those pursuing the suspect believed him to be the original shooter.

He was a part of an armed militia who was walking around the protests, at times acting in coordination with law enforcement. Video footage shows the group speaking with police who provided them with water and told them thank you, telling the militia that they appreciated them.

The individual who filmed the first shooting started that the altercation began when the armed 17 year old confronted some protestors who were vandalizing vehicles.

Video below is a compilation of all available videos which also shows the first shooting which occurred after a bag was thrown at the shooter.

Protests erupted in Kenosha on Sunday after police shot Blake, a 29-year-old Black man, as he was opening the door of his parked car. Although shot seven times in the back at close range, Blake survived. He is hospitalized in stable condition but reportedly has been paralyzed below the waist. The circumstances around Blake’s shooting remained unclear on Wednesday, three days after it occurred. Two officers have been placed on administrative leave while the incident is investigated by the Kenosha County district attorney Michael Graveley and the Wisconsin Justice Department’s division of criminal investigation.