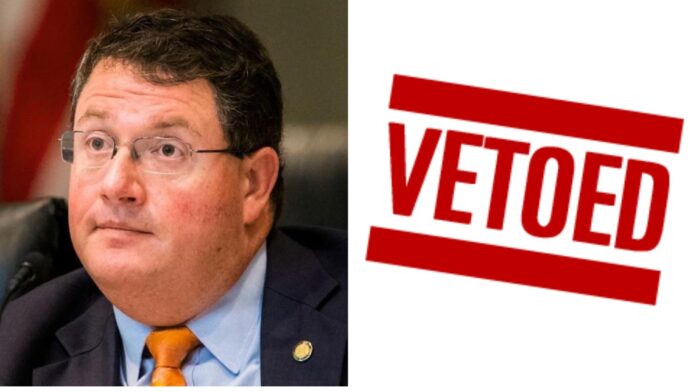 At a press conference in The Villages today, Governor DeSantis signed the budget passed by the state’s legislature into law totaling a record $109.9 billion.

Along with that signing was a slew of line item vetoes totaling $3.1 billion.

One of the most high-profile items was an item sponsored by Representative Randy Fine who is the chair of the K-12 appropriations sub-committee.

Fine wanted to punish 12 school districts that imposed face mask mandates on students at the start of the 2021-22 school year.

Fine’s initial budget proposal to take $200 million in funding from the school districts by cutting the salaries of any administrator making over $100k. That proposal was struck down by the Senate after passing the House. Fine then attempted to restructure what he called “the reckoning” by rewarding only the school districts that didn’t enforce mask mandates with additional funding, and withholding it from those that did.

The “reckoning” however, appeared to be dead on arrival.

In a letter to newly appointed Education Commissioner Manny Diaz, DeSantis stated the law doesn’t allow Florida to withhold that money from the schools. He stated Fine’s plan did not follow the “plain language” of the programs requirements.

Fine was apparently unaware of the veto as he celebrated with this now deleted tweet.

This is the second blow to Fine from DeSantis as of late. Fine infamously stated from the House floor last session in closing on a bill that he “I don’t know what i’ll be doing next year, I don’t even know if I’ll be back here.” Sources close to him state that Fine was lobbying hard for DeSantis to appoint him to the newly vacated Education Commissioner position. DeSantis did not.

You can read the Governor’s letter here.