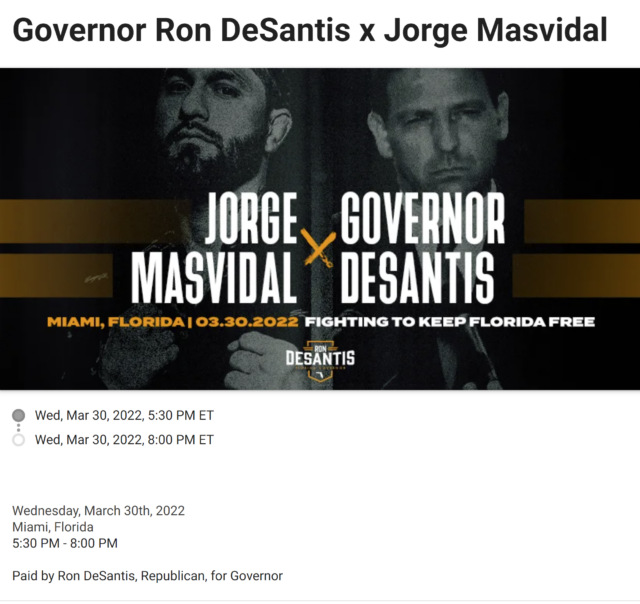 Jorge Masvidal is in jail in Florida … he’s been arrested over his alleged attack on Colby Covington.

Jail records show the 37-year-old UFC star was booked in Miami at 10:27 PM ET on Wednesday, where he posed for a mug shot.

The records show he was booked on two charges — aggravated battery with a mask, and criminal mischief. His bond has been set at $15,000, the records show.

WPLG Local 10 News shot video of Masvidal as he entered the jail in cuffs. The footage shows he sprinted into the station without taking any questions from reporters.

Invitations for the event were sent out just a day after TMZ Sports released video showing an alleged altercation between Masvidal and UFC fighter Colby Covington in Miami Beach. A Miami Beach Police Department report MMA Junkie obtained Tuesday labeled the incident as a felony battery and identified Masvidal as the lone suspect.

Masvidal has been accused of punching Covington twice as his UFC rival was leaving popular restaurant Papi Steak on Monday night.

In police documents, cops say Covington told them Masvidal hit him in the mouth and the eye — causing him to fracture a tooth.

Cops also say Covington suffered an abrasion on his wrist and a damaged watch.

In video  shortly after the alleged incident, Covington can be heard appearing to describe the attack, saying, “He’s over here swinging, trying to come at me, and I ran …”

Covington has yet to comment publicly on the incident.

Masvidal has also repeatedly backed DeSantis, for his stance against some pandemic safety measures on social media.