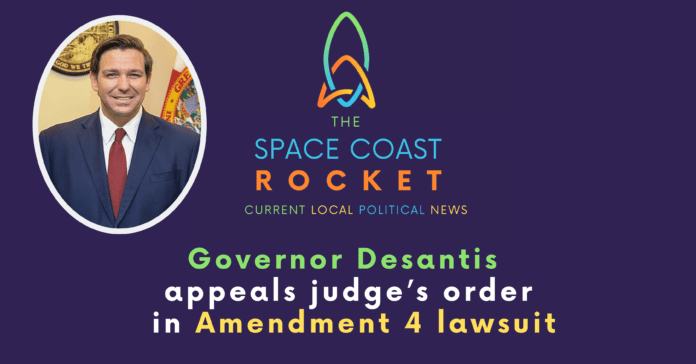 Today Gov. Ron DeSantis appealed a federal judges injunction in a lawsuit over Amendment 4, which restored the right to register to vote to felons earlier this year.

17 felons sued the state this year after DeSantis signed into law a bill requiring felons pay back all court fees, fines and restitution before being allowed to vote. The judges induction required election supervisors to not remove the felons from the voter rolls.

In some cases, those effected could not even be told how much they owed by the clerk. Others did not have the means to pay the restitutions and court costs.

In a statement, DeSantis’ spokeswoman Helen Ferré accused the 17 plaintiffs of “attempting to use the court process to re-write the scope and original intent of the amendment.”

“The governor understands that protecting the integrity of our elections system is paramount and believes Floridians deserve greater clarification regarding the implementation of Amendment 4,” spokeswoman Helen Ferré said in a statement.

Last year Florida voters approved overwhelmingly Amendment 4 by nearly two-thirds vote. According to the creators of the amendment, it was to restore the voting rights to convicted felons who completed all terms of their sentence.

The legislature this year passed a bill to define “all terms” to include court costs; a move contrary to the intent of the creators of the amendment. It is debated that this is against the will of the voters and essentially creates a “poll tax.”

This amendment was said to restore the rights of up to 1.4 million Floridian’s who had completed their felony sentences that were not for murder or sexual crimes.

The Judge wrote that being poor cannot stop people from voting, and that the Legislature must create a way for poor felons who owe money to vote.

The injunction is being appealed to the 11th U.S. Circuit Court of Appeals.