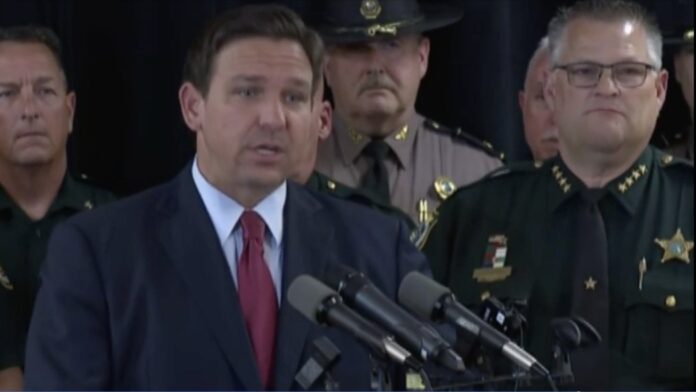 Gov. Ron DeSantis announced on Wednesday that Florida is answering the recent call from the governors of Texas and Arizona to help secure the U.S. border.

DeSantis met with Florida Attorney General Ashley Moody and a group of troopers, deputies, and sheriffs at the Escambia County Sheriff’s Office in Pensacola.

“We are the first state to commit support for this effort,” DeSantis said.

DeSantis compared the deployment of state resources to rendering aid during an emergency situation such as a hurricane. He and Moody said President Joe Biden’s administration isn’t doing enough to protect the southern border.

“We believe it’s in our interest that this be gotten under control,” DeSantis said, adding some “potent” illegal drugs in Florida are coming from the U.S.-Mexico border.

DeSantis said the Florida Department of Law Enforcement and the Florida Fish and Wildlife Conservation Commission are among the agencies involved.

He also stated that Brevard County will be sending support as well. Sheriff Ivey stated that the Biden administration has opened the flood gates on the border.

Texas Republican Gov. Greg Abbott announced on June 10 that his state will be increasing efforts against cartels and smugglers. He declared a disaster.

Abbott said since Biden is not making border security a priority he wants to use state resources to build a wall and have troopers arrest undocumented immigrants.

Abbott and Arizona Gov. Doug Ducey, who declared an emergency, sent a June 10 letter to governors across the country. They asked for law enforcement support through an Emergency Management Assistance Compact, a state-to-state mutual aid system.

Abbott and DeSantis are campaigning for reelection in 2022 since their terms end January 2023. Ducey’s term also ends that month, but he is not eligible to run for a third consecutive term.