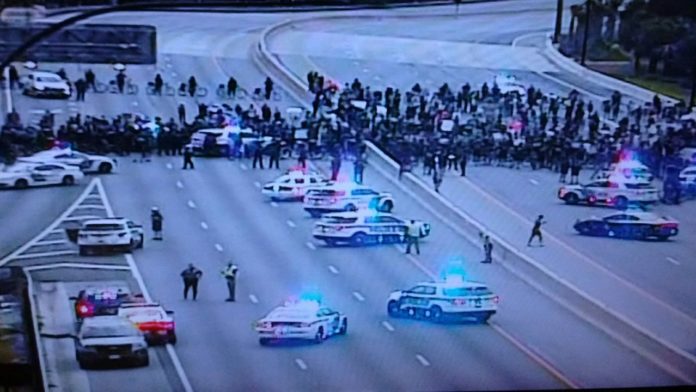 On Sunday morning, shattered shop windows and destroyed police cars in parts of South Florida signaled the aftermath of a tumultuous night of protests, as hundreds took to the streets Saturday night to express their frustration with the police killing of George Floyd.

While some protests remained peaceful and even hosted dialogue between police chiefs and civilians, other parts of the city were subject to looting and destruction.

By the end of the night, a total of 57 individuals had been arrested in connection to the demonstrations, police confirmed Sunday. Officials said the most common charge was curfew violation.

On Sunday afternoon, Florida Gov. Ron DeSantis activated the National Guard in response to the weekend’s protests, according to the governor’s spokesperson on Twitter.

Officials say there are 150 guardsmen in Miramar who will be used to support law enforcement. There are also 100 guardsmen in Tampa and 150 in Camp Blanding.

Both men spoke in support of the peaceful protests, but condemned any vandalism or looting.

“If you see someone breaking the law, separate yourself from that person,” Colina said. “Because if you don’t, you are culpable.”

Colina added that, of the 57 people that were arrested last night, 13 were Miami residents. The others, he says, came from Minnesota, New York and Georgia.

Another protest took place Sunday. Hundreds gathered outside the American Airlines Arena before marching down to the federal corrections facility.

Protestors cheered on inmates – who could be heard banging on their windows – before taking a seat in front of the facility.

The group eventually made their way to I-95, where all westbound lanes were blocked by the protestors.

Later in the day, Coral Gables issued a state of emergency and a curfew between 9 p.m. and 6 a.m. until further notice.

Cities all across the country have been thrown into disarray by nationwide protests, as years of festering frustrations over the mistreatment of Black people at the hands of police boiled over in expressions of rage met with tear gas and rubber bullets.