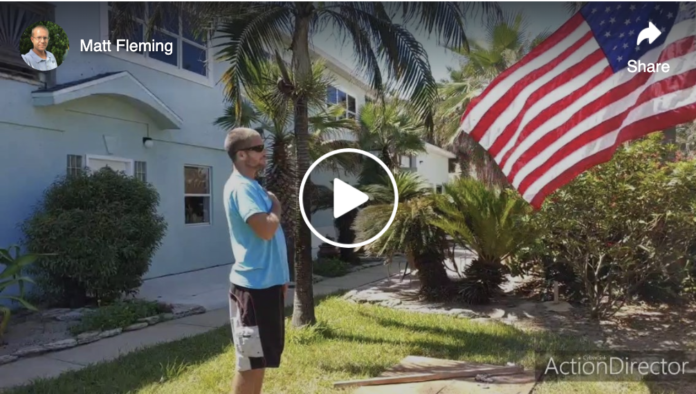 He entitled the video “Burn a Trump flag. It’s the patriotic thing to do.”

He is encouraging others to do the same thing and post the video on social media.

When asked why he decided to do this, he responded:

“I’m an independent small business owner and I’m sick of watching disorganization and stupidity rule our politics. Every American has a right, and therefore a responsibility, to call bull** when our elected leaders treat the government and our taxes like their own private piggy bank. That money should be going to make sure we live in a happy, healthy, and safe society. Whether it’s Trump’s servant Governing this state, or the Republican party putting an idiot in charge so their friends can raid the treasury, the responsibility falls to us to call it out, and make job changes where it’s necessary.”

Fleming is a precinct committeeman for the Brevard Democratic Party. He is also founder of ‘Save the Midreach’ which according to it’s facebook page, is an informal community organization that loves Brevard’s reef and want our government to preserve it. ‘Don’t bury our reef. Save the Beach AND the Money’

He has become known for locally organizing anti-Trump rally’s and protests. He states he is considering a run for Mayor of Satellite Beach.