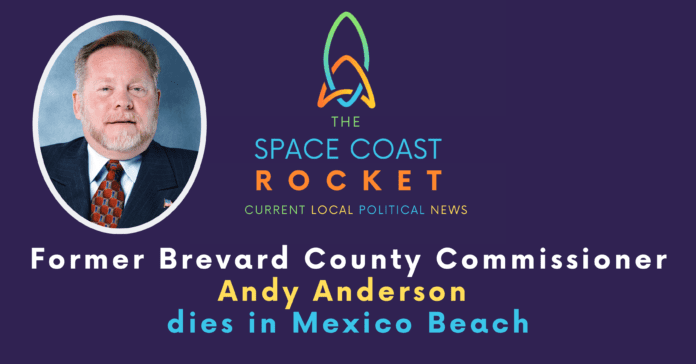 Anderson served on the Palm Bay City Council from 2003-07 before winning two terms on the Brevard County Commission from 2008-16. He then went on to become the Director of Economic Development for the City of Palm Bay, hired by former City Manager Greg Lynk.

He also served several times as deputy city manager after the resignation of David Isnardi who also served as his chief of staff while he was a County Commissioner.

Lynk was fired as City Manager of Palm Bay last year after the 2018 elections. Lynk, Isnardi, and Anderson are involved in the corruption allegations from the City of Palm Bay related to the multiple felony charges David Isnardi currently faces.

David Isnardi’s wife Kristine currently serves as the Chair of the Brevard County Commission and is running for re-election in 2020. She also served previously on the Palm Bay City Council.

Shortly after the appointment of a new City Manager and the arrest of Isnardi, Anderson submitted his resignation to pursue a new career in Mexico Beach to assist the city with rebuilding from the destruction of hurricane Michael.

The National Hurricane Center reported that 1,584 of the town’s 1,692 buildings were damaged or destroyed.

In the private sector, Anderson worked as a finance controls manager at Johnson Controls at Kennedy Space Center. He also worked in the sales department at Space Coast Harley-Davidson in Palm Bay.

Anderson was born and raised in Ashtabula, Ohio, and he was a lifelong Cleveland Browns fan. He and Sabrina had three sons.

Mexico Beach city officials said that the cause appeared to be an allergic reaction of some sort, but the cause of death has yet to be confirmed.

There are too many achievements of Andy’s outstanding 8 years as District 5 Commissioner to list in this one post but I would be remiss in not mentioning a few: his determination to get the St. John’s Heritage Parkway funded and constructed, the hundreds of coats he collected for needy kids through his Coats for Kids Drive, his commitment to veteran causes, the holiday gift drive named Elves for Elders that continues to this day, the establishment of the dog beach at Canova and his support of the Boy Scouts of America, both personally and professionally.