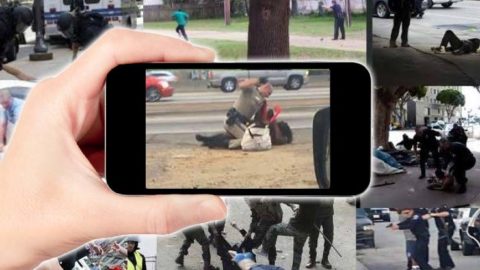 Monday, FL Representative Alex Rizo (Republican-Hialeah) filed House Bill 11 “Impeding, Provoking, or Harassing Law Enforcement Officers.” The law prohibits approaching a law enforcement officer or remaining within 30 feet of an officer with specified intent after receiving warning not to approach. Anyone in violation of the law would be charged with a second-degree misdemeanor, which could include taking cellphone video of officers if they believe that it is interfering with their duty.

Under the parameters of this law, each citizen present in the now infamous cell phone video of the murder of George Floyd, could have all been arrested and jailed doing exactly what they did. At one point in the video (4:28 mark), former officer Derick Chauvin pulled out a can of mace to threaten the bystanders to back up. Once it became obvious that Floyd was probably dead, officers became more aggressive repeatedly telling the bystanders to back off. All of their actions would be arrestable offenses under this new bill.

According to the bill, the following are a list of actions of intent that would constitute a violation in relation to an officer performing his duties:

If the officer interprets an individuals actions as any of the above, they would face a second-degree misdemeanor charge, be fined $500, and could be jailed for up to 60 days.

Below is one video that went viral of a Vallejo officer’s interpretation of “interfering” when he arrests, and assaults a Marine Corps veteran for filming a traffic stop from his own front porch.

Arguably the most problematic term in the list of actions that would warrant an arrest, is the term “interrupting.” An officer could legally interpret a bystanders action of inquiring what he is doing, or why he is doing it as “interrupting,” and it is up to that officer’s belief at the time whether or not you are interrupting them.

A divided Florida appeals court ruling in May upheld the arrest of a woman who filmed officers outside a movie theater arresting her teenage son for sneaking into a movie.

Officers had the authority to arrest a young mother named Tasha Ford who recorded them detaining her teenage son in 2009, based on a 2-1 opinion by judges at the 4th District Court of Appeal. This ruling comes under current state law, which is far less restrictive than Rizo’s proposed bill.

“In short, she obstructed their investigation and processing of her son’s detention — a lawful execution of their duty,” Judges Melanie G. May and Edward L. Artau wrote.

Officers said they gave repeated orders for her to stop using the camera without their permission, as it was interfering with the investigation.

The officer’s attorneys argued that Ford invaded their privacy, justifying the charges of intercepting oral communications and obstruction without violence.

The appellate judges who ruled in favor of the arrest noted that the police had “probable cause” to arrest Ford on the obstruction charge. The State Attorney however, chose not to prosecute the charges but she sued the cops in a false arrest claim. The litigation continued for over a decade, as a trial court judge agreed with the officers and Ford appealed.

Judge Martha C. Warner, in a lengthy dissent, wrote that the mom did nothing wrong and police should have no “reasonable” expectation of privacy in public places.

She also warned that shielding cops from view would mean “everyone who pulls out a cellphone to record an interaction with police, whether as a bystander, a witness, or a suspect, is committing a crime.”

“Given how important cellphone videos have been for police accountability across the nation, I do not believe that society is ready to recognize that the recording of those interactions, which include audio recordings, are somehow subject to the officer’s right of privacy,” Warner said.

“If that were the case, then had the individual who recorded George Floyd saying to the officers ‘I can’t breathe’ been in Florida, he would have been guilty of a crime.”

In Philadelphia, an officer is currently under investigation after his own body camera captured him allegedly deleting cell phone video from a suspect who was recording him during their interaction.

President of the Broward County Police Benevolent Association, Rod Skirvin, said, “I don’t think that there is any problem with recording the police. I think everyone should be able to do that, but I don’t think you should get in their face to do it.”

Bills are being filed in the Florida legislature for the 2022 legislative session, which begins on January 11th. If this bill were to pass, it would potentially go into effect October 2022. A senate companion bill has yet to be filed.

In Brevard County, every law enforcement agency either has, or is in the process of obtaining body cameras for their officers, except for the Brevard County Sheriff’s Office. Sheriff Wayne Ivey has stated his deputies will not be wearing body cameras, citing the privacy of citizens.